I have suggested before that if men are trying to "Alphas" it's not because the want to be, but it's due to some women's manipulation. That is, they think if women like confident, funny men, some men try to be those things (but misname it "Alpha" then pile on a bunch of garbage with it - like the name itself).

But still, it's in response to women's unconscious manipulations. 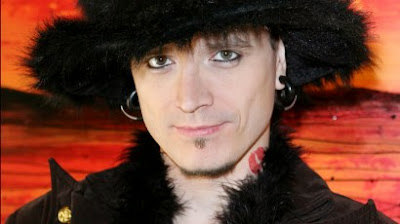 "Hi, my name is Mystery and I wear a fuzzy hat and mascara to try to get laid - no matter how ridiculous I look!"

Scott Adams, he of Dilbert fame, has a cartoon showing Dilbert putting his head in a drawer and slamming it on his head, in response to a woman's claim that he had to do it to date her. Her last words in the panel? "And they're supposed to be on the ones who run the world."

In the past, one of the things that a man is supposed to be is one who does not change his behavior in response to what women want.

I've mentioned this before, but I know guys who have slept with over a hundred women. Not surprisingly they were wimps and by middle age, were desperately dependent on one women. They didn't love them; they were just desperately, anxiously dependent on them.

One of the reasons why is because they never their own man. They did what women wanted so they could get laid a lot. And some never understand that.

I've never understood why a man should be so desperate that he'd do absolutely anything - basically shit on his own dignity - just to have sex. It always seemed easier to go find another one that liked how I was and made the same plain to me.

Women can now look at me pityingly and say "you just don't get it" all they like. To me, that type are full of manipulative BS.

Americans are generally obsessed with sex. It's integral to marketing all product, so we're all trained like Pavlov's dogs.

The 'unlucky' ones (like I was lucky enough to be) get used and crapped on so much by women during their youth that, by the time that they are in their thirties and lose their 'hormone haze', they have become so disgusted by the behavior of women (and have also seen what happened to the guys that were 'lucky') that they become indifferent to them, and/or even avoid their presence.
I feel sympathy for the younger men now, as Western women have reached the point that a man is much better off without them in his life, as they have made themselves so toxic now that they are an active threat to a man's career, life, and happiness.

No man's life, liberty, property and pursuit of happiness is safe if he gets involved with the wrong woman.

Bob, you are spot on here. Take a look at these two cartoons which treat the topic in a humorous fashion. Both are from the 1950's. Putting aside the female-as-money-grubber theme which would never be shown today, the Tom & Jerry cartoon shows a man willing to do anything to get the girl.

The Donald Duck cartoon shows the man as aloof and indifferent. In fact, he's the one who is the great "catch" in the relationship, not the woman. This theme would never we shown today.

"be shown today" that is.