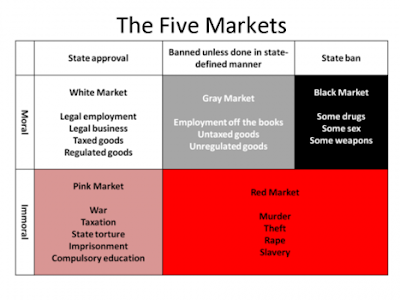 Monetary and credit inflation has brought down economy after economy for thousands of years. Do governments ever learn? Silly me, of course not.

I expect more and more people to move out of the cities (and leave them to the Third Worlders in our midst) and into rural areas, where there will be more barter and underground economies.

By the way, I used to live in St. Louis and have been through Ferguson many times. It used to be two-thirds white and one-third black. Now's it's one-third white and two-thirds black, and soon it will be like Wellston...think "East St. Louis."

I can guarantee you that when push comes to shove the police are not going to be there for you. They're good at bullshit like giving out tickets to line their pockets, but in a pinch they're gone.

This article is from the site Examiner.com and written by Matthew Reese.


"A recent study by Edgar Feige, an economist at the University of Wisconsin-Madison, suggests that the size of the underground economy in the U.S. in 2012 reached $2 trillion. A study done by Friedrich Schneider, a professor at Johannes Kepler University in Linz, Austria, suggests that this figure was only $1 trillion in 2009. The underground economy, also known as the gray and black markets, is the business activity that does not get reported to governments and taxed. This underground economy includes everything from activities banned by the state, such as selling certain drugs and weapons, to off-the-books jobs in fields as diverse as childcare and construction.

"Many economists blame the recession and lackluster recovery for the growth of the underground economy. 'You normally see underground economies in places like Brazil or in southern Europe,' said Laura Gonzalez, professor of personal finance at Fordham University. 'But with the job situation and the uncertainty in the economy, it's not all that surprising to have it growing here in the United States.'

"'I think the underground economy is quite big in the U.S.,' said Alexandre Padilla, associate professor of economics at Metropolitan State University of Denver. 'Whether it's using undocumented workers or those here legally, it's pretty large.'

“'It’s typical that during recessions people work on the side while collecting unemployment,' said Bernard Baumohl, an economist at the Economic Outlook Group. 'But the severity of the recession and the profound weakness of this recovery may mean that a lot more people have entered the underground economy, and have had to stay there longer.'

"Most mainstream economists and sociologists see this development as negative. 'Too much off-the-books work is not good for the social contract,' said Sudhir Venkatesh, a sociologist at Columbia and the author of a study of the underground economy. 'Economies work best when people have some sense, however abstract, that they are all tied together.'

"There is, however, another school of thought that sees this development as positive, and hopes that this trend will continue. That school of economic thought is known as agorism.

"gorism is a libertarian social philosophy that advocates the goal of the bringing about of a society in which all relations between people are voluntary exchanges by means of counter-economics, or the use of the gray and black markets. The agorist ideal would be an economic secession from the state by relying solely upon the gray and black markets. Agorism includes replacing the use of government fiat currency with barter, local exchange trading systems, and/or the use of commodity-backed currencies, such as those based upon precious metals. The ultimate goal of such actions is to abolish government through peaceful means by depriving it of the resources that its agents need to carry out government functions. Agorism was first proposed by libertarian philosopher Samuel Edward Konkin III in 1975, with additional contributions by J. Neil Schulman.

"It is possible that the transition from state-sanctioned economic activity to counter-economic activity will not be a temporary development related to current economic turmoil, but will be the first step toward the emergence of a truly free market through the theory of agorism. Only time will tell."

I certainly feel no social ties to that abstraction. Nothing motivates a man more than driving by a new public housing unit with padded grass and nice fencing.

The evil Feds really screwed the guy who created the Liberty dollar.

What a great article. Thanks for sharing. We are always looking to innovate and carry the industry forward by sharing great practices. What are your thoughts on digital advertising in regards to SEO, Graphic Design and Content? We have seen it all over the map from 500 word pieces to 2,500 word pieces. Not to mention the new hipster designs and parallax themes. What are your thoughts? Come check us out some time. Would love to hear what you think about our blog articles too.centermassmedia.com

Where did the table come from ?
http://www.nicolaslevy.net/home.html