I had a girlfriend's female cat come back from the vet (where she was spayed) with the tip of her left ear gone. It was a sign she could no longer have kittens. It was about then I realized if you to really screw up society, degrade the women, because they are the ones who have the babies.

This is something I've noticed myself: for IQ going down it isn't the cads (although every cad I've known has destroyed his life, but that's a different story) but it's the lower-class, low-IQ sluts who have the kids.

I've never known a higher-IQ cad to have any children (and I've known them to have a count of over 100 women), but I've seen a lot of hideous Wal-Mart mothers towing their stupid, overweight kids behind them. Usually the father, when I've met them, has been some skinny loser (they are never "Dark Triad Alphas," just dumbasses, although often good-natured ones). And most of the fathers and mothers are on various kinds of welfare.

I've never seen these women go after "resources" or "Alphas" or be attracted to "bad boys." Generally they're attracted to losers like themselves.Like attracts like. Which is why I've written, more than once, that those who tell you about Alpha Fux/Beta Bux/Etc. have little experience with women or in life, and are often outright lying to you, apparently for attention and perhaps some money. Life cannot be stuffed into such tiny little boxes.

Women are attracted to men all over the map. And LAMPS doesn't work the way it's promised.

The K-selected do have children, but are being outbred by the r-selected. The most promiscuous girls I knew in high school got pregnant early (like at 15 - and I knew girls having sex at 13). The most promiscuous ones I knew in college did not because of birth control or abortion. And many ended up not having any kids at all because they played around with "career" and then got so old guys weren't interested anymore.

You can see from the map that the "pretty smart" women have more children than the "really smart." This supports something else I've noticed: once your IQ gets above 130 you're basically a semi-autistic nerd and don't have many social skills - and that includes women. I once had a girlfriend with an IQ of 143 and socially she really didn't much get it, although she did make a lot of money - like $120,000 year. She never had any kids.

The movie movie Idiocracy is true, but made its point by exaggerating. And it's going to take a long time to get there.

This article is from Jayman's Blog.


"There has been a lot of discussion in the blogosphere as of late as to whether the 'cads'—i.e., low paternal investment, promiscuous (and often low-IQ) men were siring more children than 'dads'—high paternal investment, monogamous, high-IQ men. While I and others have produced some evidence (primarily from the GSS) that tenuously indicates that this is not the case, it may be impossible to know for sure, due to the potential unreliability of self-report promiscuity and fecundity.

"The finding that motivates these observations is the fact that the age of the onset of puberty seems to be decreasing. While the primary cause of the decrease is likely better nutrition (mirroring secular increases in height, BMI, and IQ), the change is not so dramatic that genotypic change, i.e., evolution, cannot account for a large share of it. Peter Frost and Heartiste have posited that this may be because cads now have a reproductive edge over higher investment men. They certainly appear to have a mating edge, but thanks to modern contraception, it’s unclear if that translates into an increased number of descendants.

"However, I’ve realized that we’re looking at this the wrong way. If the 'r-strategists' (low-IQ, low future time orientation, higher sex drive, earlier maturing individuals) are breeding more, it may have little to do with dads. It may be about the moms.

"The Audacious Epigone and myself have discovered that when compared by IQ, for men, reproduction is pretty even. That is, men reproduce roughly equally at all levels of IQ. However, for women, this is not the case; low IQ women appear to be considerably more fecund than their high-IQ sisters: 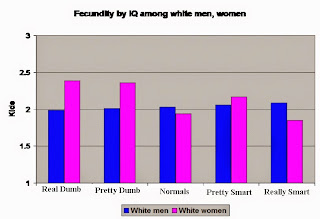 "Women on the low end of the IQ bell curve, where many of the r-strategist behaviors are to be found, pass on their traits to both their daughters and sons, which could explain the decreasing age of puberty (beyond whatever is explained by better nutrition).

"Low-IQ women likely didn’t have a reproductive edge in the past. Back in the day, people—especially women—were far more variable in their reproductive success than they are today. Indeed, my own look into the GSS found that back at the beginning of the 20th century, a sizable portion of women (nearly 20%) failed to leave any offspring.

"As well, nearly another 30% percent had four or more offspring, 10% having 8 or more. One can imagine that this process was likely eugenic in several respects. As has been the case for Europeans since prehistoric times (on and off), women were dependent on breadwinner husbands to survive—or at least to successfully raise a family—thus the mating market for eligible bachelors was in men’s favor. One would imagine that such a situation allowed women to be somewhat selected for traits such as beauty, work ethic, faithfulness, and, quite likely, intelligence—in other words, K-selected traits.

"Today, women are far more even in their reproductive success, with most women having between 1-3 children. Further, the existence of the social safety net and other developments, such as women gaining entry into the work place and welfare, have allowed women who leaned more towards the r-side of things to be more successful than they once were. This would translated into more r-selected traits—earlier puberty, increased promiscuity, and lower IQ—becoming more prevalent in the population, even if men of all walks were about as reproductively successful today as they were in the past.

"Now I’m sure certain voices will use these data to advocate certain social agendas, particularly trying to roll back the modern age of the sexually liberated, working woman. Whatever merits this might have (and to be fair, there would be some), this is simply not going to happen in the foreseeable future. The best way to address the apparent issue of dysgenic breeding among women is to promote more and better family planning and to adopt conditional welfare measures.

"I will add that the above GSS data that this post is based on may come with a caveat: it may be that it’s not that lower IQ men have the same number of children as their smarter counterparts, but that they are less able to keep track of the number of children they sire. After all, a woman always knows exactly how many children she’s had. This is not necessarily the case for men.

"Overall, this does indicate that dysgenic fertility is primarily occurring in the form of excess births to low-IQ women (and/or deficient births to high-IQ women, thanks primarily to lengthy educations). This may be the legacy of reduced competition between females for mates, as was the case in sub-Saharan Africa, producing similar evolutionary pressures."

I see welfare and child support as the root cause of all of this.

It gives huge incentives for the low IQ, low functioning women to reproduce and it creates an environment where the Dads are less involved, less in the picture (going from an 8% single mother rate in 1980 which then was seen as alarming) to 40%+ in 2014. so bad genes with a bad environment (Dads have a strong impact on the intellectual environment a child has which won't turn a dullard into a genius, but could be the difference between functioning and productive and low producing functioning)

There is at this point going to be only one way there is a course correction back to K selected, and that is the collapse of the welfare state, and that would be horrible beyond measure.

This seems to be the pattern though. An empire is built up, it prospers, the rabbits explode and the empire is destroyed.

I can imagine that at some point in some future a society will take measures to prevent this for the greater good, but it is not ours.

As for the Cads destroying their lives, I think it depends on the level. Most men in current society based on an average notch count of 5 would be seen as caddish, most women would be seen as harlots prior to the 60s.

Compared to the destruction being wrought on married men, I can't say the cad life is really worse. Its the married men that engage in suicide far more.

Finally, while you are right that alpha fucks/beta bucks is simplistic, I think you're taking an easy way to convey a message that men understand about the way women work.

It is readily apparent that some men get for free from a woman what other men have to pay for. That this varies among women doesn't change that. It is readily observable that famous men and powerful men (musicians, actors, politicians) tend to have women throw themselves at them (it doesn't have to be all women to be a pattern) and it is also observable that despite all these things a man can be such a nerd that women do not throw themselves at him (see Bill Gates).

It is also observable that raw forms of masculine violence and dominance also attract women (even if these men are evil) by simply observing the number of death row inmates women fall in love with in prison.

It is not sufficient to say these women are broken (they most certainly are) because you don't see broken men do this.

Just as it is observable that the male version of this is being pulled in by the attractive damsel in distress that sucks the life out of them.

The idea that women are "to varied" which is what you're promoting is a huge mistake, it is a step back toward "women are unknowable" by men which is not true.

The Bible gives a lot of descriptions about the nature of women that are binary, and "game" is observing the same things.

Just because people have a certain "type" and it varies, doesn't mean the fundamental human dynamics are not the same.

Having watched enough women start to ramp up the search for a husband at 29, and snag some sucker within a year and get pregnant shortly thereafter, doesn't mean all women do it, but it does mean that there is some understanding of their degrading beauty and buying power at that age.

Just as it is readily observable that these same women start to cheat and divorce around 35 after two children, even if not all of them do it. There are obviously constraints: religion, personal view of self, looks, availability and opportunity.