"The fact is, genocide is, historically, the most common result when one tribe runs into another." - the War Nerd 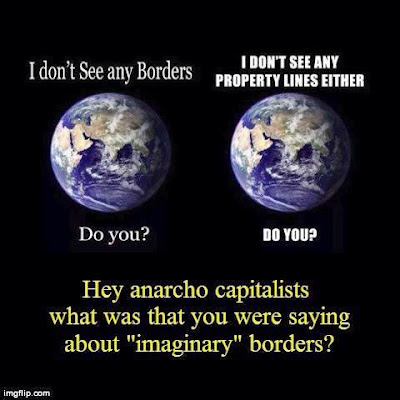 Many people want a simplistic philosophy that they think explains everything and can be applied to everything.

"Libertarianism" is one of them.

I meet people who think there should be no borders at all because they think they are "imaginary."

Guess what? Property lines are imaginary, too.

And the only reason property lines can be enforced is because of violence, or the threat of it.

Fortunately, most people will respect property. If they didn't we wouldn't have a viable civilization. But there are that small minority of people who don't respect property, including your body. Ultimately the only thing that works on them is the threat of violence, or violence itself.

Of course the greatest offender is the State. But the fact remains there has never been a society that didn't have government, and anarchism is not the solution, because there were always be a sociopathic gang that decides to rampage through society. And these problems are worse in a "multicultural" society, because different tribes cannot share the same land - just the way "Hispanics" want blacks out.

I lived in Albuquerque for four years. "Hispanics" hate blacks, just the way blacks hate Asians and abuse and attack them.

In fact there may be no solutions, just trade-offs.

The problem is these open borders types don't understand human nature, which in my book makes them leftists who are trying to overthrow ancient wisdom and impose an utterly unrealistic belief system on people.

I'd hate to end up in the kind of society described by Neil Stephenson in The Diamond Age - heavily armed tribes eternally defending themselves against predators.

Liberty is a good thing, but it must be tempered by a sense of responsibility and the understanding that it applies to everyone equally. Inviting those into our culture who are, at best, indifferent to the concept and at worst, actively and rabidly opposed to it, leads to...

For much of the USA, "The Diamond Age" would be a great improvement.

The open borders would be of some practicality if and only if there were truly other places you could move to that had variations of limited government to choose from. No such thing exist of course.

One point I do agree with on the open border libertarians is that once the government had papers on you, your toast. The sociopaths in government will always work to use it against you as opposed to increase liberty.

But then, liberty only matters if people have an idea of that concept. Sadly, most people are happy as comfortable slaves.

Aristotle was perhaps the first to notice that some people are natural slaves.

Like Friedman said, can't have open borders and a welfare state.

Yes, the Diamond Age would be an improvement for much of the U.S.

Snow Crash wouldn't, though. I don't care to live in a storage locker.

I'm a long time reader and first time commenter and I have to admit I'm of two minds about this issue. I agree with you about the things that go awry with open borders, but on the other hand, as one who been hurt by ever more onerous documentation requirements the government imposes on job-seekers who must prove in advance they are not illegal aliens so they can work, I often just want to say fu^%& the damn immigration bureaucracy and its procedures. (There was a period I was unemployed for six months due to inability to get a birth certificate.) I guess there are no solutions, but rather only trade-offs.

In addition, I now live in Asia where the idea of "open borders" would be considered laughable. If you want to live in China or Vietnam you need to have a verifiable job in advance and pay not a trivial amount for a visa; this seems to work just fine for them.

An ESL teacher who worked at the same university as I did decided, probably after imbibing a little too much bai jiu*, it would be fun to pull his pants down in front of his class. He was deported on the same day. I doubt we would see the same result if a Chinese expat did the same thing in the USA.

Again you've made the situation crystal clear. Reblogged with commentary here:
"Borders Are Imaginary" Is A Delusion

"I don't see any borders/property lines. Do you?"

Just zoom in a little closer.

No matter how close you zoom in you'll never find a property line. They are imaginary, exist only in our heads, and are defended by violence or the threat of violence. And if I take your "land" from you then it's MY land. What are you going to do - shoot me or call the police. Oops - violence!