The South Should Have Won

"Behind every fortune is a great crime" - Honoré de Balzac 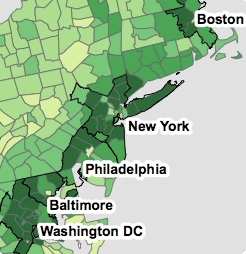 The War Between the States was not about slavery. It was about what almost every war is about.

Half the wealth in this country is concentrated along the Boston/New York/Washington D.C. corridor. These are the Yankees that started the War Between the States. This is pretty much where the "1%" live.

The death rate among Southern officers - the smartest - was appalling.

How what is there that makes this corridor so rich?

Why, the federal government, of course. Sucking up taxpayer money.

The South should have won.

The more war, the wealthier this corridor becomes. "Rich man's war, poor man's fight." The Bushes, for example, are not Texans but wealthy New England Yankees.

Governments go through three phases: agricultural, industrial, and when they start to collapse, financial. The latter is always associated with Empire.

We are deep into the financial/empire phase, thanks to that corridor and the people who keep sending politicians there, thinking they'll make a difference. For bad, yes. For good, no.

Let's put it this way: do you really think it would be any worse if they South had won and we now had two countries?

"The business of war is profitable. In 2011, the 100 largest contractors sold $410 billion in arms and military services. Just 10 of those companies sold over $208 billion." - USA Today