Why the Coming Breakup of America is Good Thing

Empires always have one thing in common: they collapse. But no, that's not exactly right: they also become totalitarian and the economy goes in the tank because of inflation, debt and regulation. Waste and corruption. Gigantic standing armies. Militarized police forces.

Personally I wish the South had won. Originally each state was supposed to be a nation, and each had to compete to get people and businesses.

There is a novel, The Mouse That Roared (it was made into a funny movie with Peter Sellers). That mouse was the Duchy of Grand Fenwick, a tiny mountainous country in Europe.

I remember the princess once rode her "ducal bicycle" to conduct some government business.

And think of Switzerland. And Lichtenstein. Small, high standard of living...no wars. A big family!

Supposedly there are 11 nations in America. 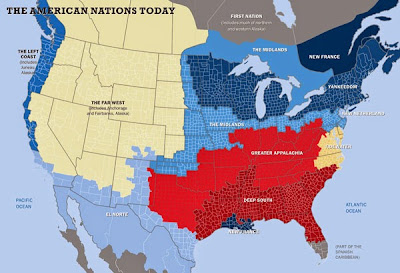 I've lived in the Left Coast, the Midlands, Greater Appalachia and the Far West.

I don't think the U.S. will break up along these lines but I wouldn't be surpised if it broke up into four nations. Personally, I have no use whatsoever for Yankeedom or New Netherland.

All over the world there are independence movements. I am for every one of them.

Didn't Glubb postulate the life cycle of empires at circa 250 years, and the some of the symptoms of latter decline as women's lib, welfare and moral decline? That would put the US rather near to demise.

I've heard of the life cycles of empires, but was not familiar with Sir John Glubb. Here's a link to his book - very good read.

You might want to try an economist named Leopold Kohr, too.