"When plunder becomes a way of life for a group of men living together in society, they create for themselves in the course of time a legal system that authorizes it and a moral code that glorifies it." - Frederic Bastiat

“You get super-rich by getting into a position where you can fence off opportunities to produce, enclosing those natural opportunities as a source of rent. You do it by collecting tolls and tribute from those who actually make stuff, as a condition of not preventing them from doing so. In other words you get super-rich by being a parasite and extorting protection money from productive members of society, with the help of government.” Kevin Carson 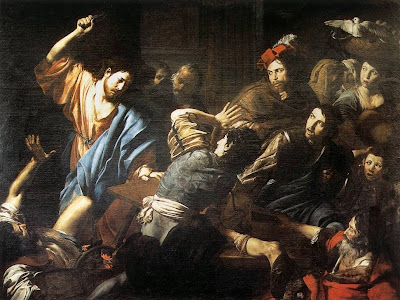 This is "Christ Driving the Moneychangers From the Temple," a 1618 painting by Valentin de Boulogne.

Some say Jesus never existed. Yet, anyone who sees through the banksters of 2000 years ago, and attacks them with a whip...well, what he did is one reason among many why I think he did exist.

There are also those who say he will return. That would amuse me. I don't think he would attack the ones people are convinced he would attack. After all, look who he attacked two millennia ago: the ones who exploited and abused the helpless.

The religious leaders of his time, the lawyers, the politicians, the traitors and the big thieves...the same bad ones of today.

"In this Gospel episode Jesus and his disciples travel to Jerusalem for Passover, where he expels the money changers from the Temple, accusing them of turning the Temple into a den of thieves through their commercial activities." - Wikipedia