"Feminist Envy of the Beautiful"

In other words, no man should listen to any woman when anything envious comes out of her mouth. Basically this means not listening, and not acting, on anything leftist - since leftism in based on envy and therefore leveling people.

I've mentioned before that in 2010 I had two women say to me, "Men are responsible for all the problems in the world." Both had been popular with men in the past, but ended up middle-aged and without home, husband and children. "You bastards, how dare you not give me what I want! I'm eaten up with rage and envy, and I'll drag you down you sonsofbitches!"

Envy attempts to bring the other person down. Since feminism is based on envy, not only of men but other women, some women will attempt to drag other women down. Specifically, unattractive envious feminists will attempt to bring down better-looking women. 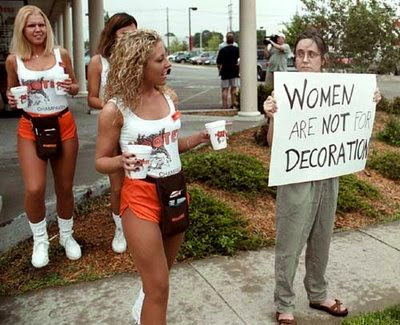 See this? The envy and hate on the face of this unattractive woman is clear to see. Since she's not a decoration and never will be, she wants the same for the other women. "Since I cannot be you, I want to drag you down to my level and make us equal." That's why leftism is based on envy: everyone must be equal.

Of course, it is not fair that women be unattractive. I wish I could wave a wand and change that.

This article is from the site Face to Face.


"This shit never ceases to crack me up. Now, I have nothing against ugly girls, but I cannot stand when people nakedly advance their own selfish ends under the pretense of altruism. First, I grant that there are groups who are so disadvantaged that they cannot stick up for themselves, and so more privileged individuals must provide 'a voice for the voiceless' -- slaves who depended to an extent on the agitation of white abolitionists, for example. But note several crucial features of such a relationship:

"1) The crusading group is in an objectively more advantageous or desirable situation, while the to-be-protected group is not.

"2) The crusading group enjoys some kind of power or influence that the to-be-protected group does not.

"3) Because of 1) and 2), the crusading group feels some degree of pity, compassion, and/or solidarity with the to-be-protected group, such that they feel compelled to help them out.

"4) The to-be-protected group will benefit from the crusade, while the crusading group does not expect to benefit in the same sense. Indeed, that is the definition of altruism: incurring costs to oneself in order to bestow benefits upon others.

"In the present case, clearly the feminazis are not protesting against the objectification of themselves: 'Women are not for decoration' -- not the ugly ones anyway. So the assumption is that they're sticking up for their oppressed sisters who work at Hooters. But let's have a look at whether the crucial features of altruistic crusading are met. As for 1), the real situation is the reverse of what's expected: it's the hot girls who enjoy numerous advantages that the plain or ugly feminazis lack. More, hot girls command the attention of not just the average male but also plain females (who then incessantly gossip about and slander them), so their messages are easily noticed -- think of the topless PETA activists (NSFW) -- whereas plain or ugly feminazis are, for some odd reason, more likely to be ignored, again the opposite of what feature 2) predicts. Therefore, rather than feeling compassion or solidarity with hot girls, the feminazis are boiling with envy and resentment, against feature 3), as is plainly visible in the stare of the plain woman in the picture. 'Stupid airhead bitch,' you can almost hear her say. 'Well, if that's what men go for, rather than cold, bitter, semi-smart women like me, then that proves that men are scum.' Turning finally to feature 4), it's obvious that de-emphasizing feminine beauty would only serve to cripple hot girls relative to their plain and ugly competitors, a la Tonya Harding's attack by proxy on Nancy Kerrigan.

"Of course, if Hooters girls were down-and-out prostitutes, there would be reason to worry about their predicament regardless of how good they looked. But they're just young girls who want to make more money than they would answering phones, manning a cash register in a clothing store, or whatever low-wage jobs are available on their college campus or the local mall. They're not strippers or any other type of sex worker. True, they'll be oogled constantly by their customers -- but hot girls have a way of attracting that type of attention no matter what job they do. The only (former) Hooters girl I know is my cousin -- her father (my blood-uncle) owns a private dentistry practice, she attended a 'public Ivy' college, and she's perfectly well-adjusted and outgoing. As I said, it's mostly a side job you take when you're young to make better money than other bullshit jobs, then you graduate and do something serious. Hooters girls are the last people feminazis need to protect, though they have plenty to covet as regards their looks and personalities. (And for those keeping score, she's 1/4 Japanese like me, but she appears half-and-half.)"

I think her sign should say: "SOME Women Are Not For Decoration"