One of my friends and I occasionally discuss our perceptions this is not the same country we grew up in. And it's not like we're old fogies; we're not old, or fogies, whatever a fogie is. But it doesn't seem to be that much fun for kids today, compared to when we were out wreaking havoc.

We don't see the kids doing the things we used to do -- dirtclod or snowball fights, King-of-the-Hill, wrestling with each other, racing downhill on bikes as fast as possible. Or riding our bikes ten miles from home without telling anyone. A lot of kids today appear to be inside, addicted to video games. I'm sure that's not such a good thing. 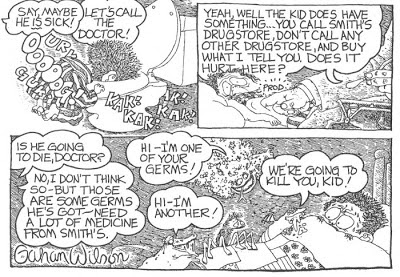 Here's another, more interesting example from when I wasn't a kid, but about 21: my car starting spinning on the highway after I hit an unseen patch of black ice hidden by the night. I spun around, went off the road and rolled a few times, and came to rest with the car on its side. I remember the motor was still running and the headlights still on. I wasn't afraid the entire time, even though I could have gotten killed, just in a state of disbelief.

The problem, really, is thinking the whole world is an unsafe place, out to get you. I am reminded of cartoonist Gahan Wilson's book, “Nuts,” which is about young kids. One of the cartoons in particular sticks in my mind: a little boy, in bed with the sheets pulled up below his chin and a look of terror on his face. Why? Because many little oozy monsters are crawling up his sheets, grinning as they tell him, "We're germs, kid. We're going to kill you."

When I was a teenager we rode horses and mini-bikes, swam in lakes, sailed our goofy Sea Snark Styrofoam sailboat, jumped off of cliffs into rivers. Nothing bad happened, no one drowned, or even came close. The most unusual thing we did is inflate one of those inner-tubes off of an 18-wheeler, then six or seven of us would stand on it in the middle of the lake and rock it back and forth until it upended. Only once was I was on the low end, and had every one fall on top of me. I remember I was so far down under the surface people were kicking me in the head. When I surfaced, everyone had concerned looks on their faces, because it took so long for me to come up. But I wasn't in danger, even that far down.

Who's behind this attempt to make the world out of Nerf? Politically, it's liberals. But what's liberalism? Isn't it just Mommy by another name? And don't Mommies want to make the world all safe 'n' snug, even though they don't understand they're taking all the fun out of everything? And maybe removing our brains, too?

Another image I have is that of "Star Trek's" the Borg. The components of the Borg are completely safe womb-to-tomb, always taken care of -- and they have no excitement, no adventure, no fun, and no consciousness or intelligence. And it's completely in character that the Borg Cube (which is just a huge womb flying through space) is ruled by a Queen, one who is motherly and concerned for the welfare of her little worker drones. To me, her most frightening and eye-opening saying was when she commented: "Why do you resist us? We only wish to improve the quality of your lives."

Does play, even if it involves risk, actually stimulate our brains? Does it serve a deeper, more profound function than simple recreation? Is it necessary throughout our lives, especially as a baby and a teenager? Are all societies damaged when Mommy takes over, because our brains go plop right out of our heads? Myself, I think so.