Setting on Fire Everything I Could Find

As a little boy I enjoyed playing with fire. The reason I no longer have any of my plastic ships, tanks and airplanes is that I set all of them on fire or else blew them up with firecrackers. It’s also the reason I don’t have any of my Little Green Army Men, either. I melted all of them (the worthless ones went first, like Mine Sweeper Guy). 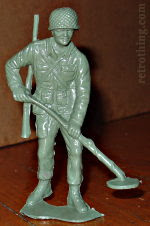 I also set myself on fire, sort of. I’d take the plastic bag the bread came in, wrap it around a stick, and set it on fire. When the plastic melted it would drip and make a zip zip zip noise. Each droplet would stay on fire until it hit the ground. Had I been in special effects in the movies or radios, I would have used that sound for a disintegrator pistol. ZIP ZIP ZIP “Wow…nothing left but boots with smoke coming out of the top of them!”

Somehow – and to this day I have no idea how – a few drops landed on the back of one of my hands. There are few things more exquisitely painful than having flaming melted plastic extinguish itself in your skin. I had to dig them out with my fingernails.

That wasn’t so great.

Then there was the Episode of the Barn. One of my friends came over with some matches and a baby food jar full of alcohol. Since I lived in a rented farmhouse, there were quite a few barns in back.

He and I were outside one barn, doing something flammable. I don’t exactly remember what. But this moron – and he was a moron – threw the jar of alcohol into the dried hay in the barn and threw a match on it.

We were about ten years old, and I realized there was going to be big trouble unless we got this fire out. I ran in, overturned a bale of hay, and began to bounce it up and down on the fire. I almost had the it out, and had my moron friend helped, we could have gotten it out.

When I looked around, he was nowhere to be seen. I ran outside the barn and saw him flying through people’s yards on the way to his house. He had set the barn on fire, made no attempt to help me put it out, and run away.

I looked in the barn and saw a wall of flames. I knew things were out of control, and ran across the street to my cousin’s house to tell them to call the fire department.

The fire department showed up and couldn’t do much. The barns were ancient tinderboxes, and every one of them – and there were several – went up in flames in about ten minutes. The outhouse went up, too. That’s how old the whole complex was.

Of course, my moron friend lied and blamed everything on me. After that, he and I were never friends again, and in fact I never saw him again. He moved away not too long after.

There’s nothing like a crisis to find out if someone is really a friend or not. When someone does something not-so-good and blames it on you, he is no friend at all. He has no honor or courage or loyalty, and it's always best to avoid people like that.

Then there was the Episode of the Wheat Field. Another friend of mine, who was not a moron, was taking flaming branches out of a fifty-gallon barrel, the kind people burned trash in, and was putting them into a wheat field.

I told him to stop, because he was going to set the wheat field on fire. He didn’t listen.

The wheat field caught on fire and the whole thing burned up. Again there were fire trucks, just like with the barns. This time my friend admitted he burned he wheat field down, that I had nothing to do with it, and in fact had warned him not to do it.

He and I remained friends.

Speaking of those fifty-gallon barrels, my parents had me put the trash in them and set it on fire. Everyone burned their trash and leaves that way. I would always put my mother’s empty hairspray cans into it, run around the corner, and waited until they exploded into a mushroom cloud ten feet tall. Then I would check on them and found they always burst along a seam.

Out of all those things, the only time I felt bad was over the barns, and that wasn’t my fault. That was the moron’s fault, and the worst thing about it, after the fact the pussy ran off and blamed it on me, was that he burned down our landlord’s barns. But then, I sort of got the impression the landlord, an old farmer, didn’t much care, because the barns were worthless, should have been torn down a long time ago – and he got his insurance money.

These days, that whole area is a new subdivision, so the barns would have been torn down anyway. He got them burned down for free, sold his fields for truckload of money, and retired a rich man.

Not so surprisingly, the moron some years later died of alcoholism. It turned out his whole family was composed of morons, because when he fell asleep on the couch and croaked, his sisters threw a glass of water on him to wake him up. Of course, he did not wake up, being dead.

Boys don't seem to do these stuff anymore. I sometimes wonder why. Too much spending time indoors, playing video games and getting fat and diabetic?

I haven’t been involved in a fire since I was 11. I still play with matches, though (only now it’s one of those disposable Bic lighters), so there’s still hope.