What do you think would happen?

Come one, you KNOW what would happen!

The women, overwhelmingly, would gravitate to worthless degrees - English, teaching, Human Resources, Women's Studies. And so on, ad infinitum, ad nauseum. Not every woman, of course, but the vast majority of them. I'd estimate at least 90%.

Not so incidentally, how many of these women in STEM wouldn't be running to guys to help them?

I remember reading James Michener's novel, Caravans, some years ago. I believe he wrote it in the '50s. Yet even then, he wrote about the graduates of women's college: good in English, mediocre in philosophy, clueless in math.

I graduated from a university that was the largest producers of teachers in a very large state. I never met a smart woman in the Education program (Education majors have the lowest IQ of all college majors). I did know one man who was an Education major, and even he thought the women were stupid. He also left the field and got an M.S. in Economics.

Speaking of incompetence, ask yourself when the last time it wasn't a woman in Human Resources? Then ask yourself if her position couldn't eliminated and if would make any difference?

When I graduated college I met quite a few women teachers and women principals. I was astonished at their incompetence. Of course, they never knew they were incompetent. The incompetent never do.

Since nearly all the degrees women get are worthless, this means these women are parasites on men. Ask yourself this: if they weren't, why are they covered by Affirmative Action (which, by the way, means "White Men Need Not Apply)"?

I have worked for women, almost of whom were incompetent. Their idea of working was to hold meetings, talk, and drink coffee. The places were way top-heavy in the "management" department. And way overpaid, too. The workers, both male and female, did all the work.

Of course, none of this can last. Things will get so bad they have to change. Of course, change only happens when the folly becomes intolerable. That's how folly works.

Of course, when things go bad and women can't find jobs with their silly degrees, they will do as they always do...blame their problems on men. 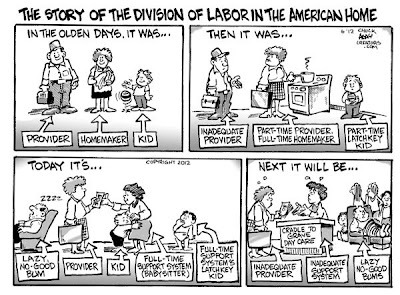