Several years ago I saw a very unusual woman walking down the sidewalk. She was tall, strutting, had tattoos, and her shoulders were broader than her hips. Not a little broader. A lot.

I immediately knew several things about her: below-average intelligence, drug user - and slut. She had blank eyes and no intelligence or character showed in her face. She knew enough to strut, though - that's why my eye was drawn to her. Then I saw the rest.

That was the first time I had ever noticed a woman whose shoulders were that much broader than her hips. Since I started noticing it, I have seen quite a few of these women.

Something is wrong here, and I do not know what. Women are not supposed to have their shoulders that much broader than their hips. That's what you see on men.

I have no sure explanation for this. I have some hypotheses. Something went wrong in the womb? All the chemicals in the environment? I have some clues. At least I think I do.

One thing I do know about these women: none I have met have ever been intelligent. Some lack character. Many are promiscuous. They're not creators of anything. Whatever they touch, they damage, sometimes destroy. 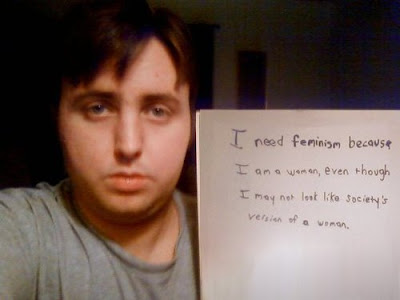 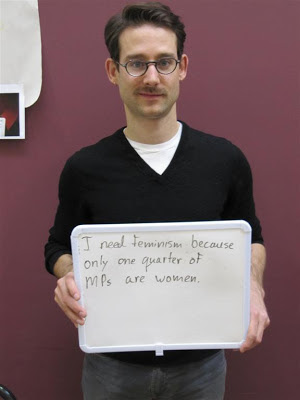 Then on the male side I've been seeing what are called Manginas. I never saw any of these guys in high school or college. But for the past several years I've been seeing them. They look soft, mostly in the face. They look physically weak. And they support feminism, sometimes rabidly. (For some reason they remind me of rabbits.)

The explanation is that these guys want get laid, but that hasn't been my experience. Many times these guys don't have much of a sex drive. They play video games a lot.

They're pussies. Not literally, of course, but in the way they look and act. More charitably, I've heard them called Manboobs.

Again, what's going on here? Chemicals? Something going wrong in the womb?

One thing I do know: none of this started until after feminism. Modern feminism has been around for about 40 years, and many of these guys and girls are in their 20s. So, apparently, some 20 years after feminism started going, there are physical changes in men and women.

Does this mean an ideology can physically screw up your body and brain? I have a very hard time believing that. About the only thing Communism did was turn people into drunks, but I never saw it turn boys into girls and girls into boys.

Is there some sort of weird Fetal Programming going on here? If so, these kids are being permanently warped in the womb, and then their perversions are activated and intensified by the dominant ideology. In other words, while you might be born with a tendency to be a Mangina, you'll only be one if society encourages it. The same with the Man-Jawed Monstrosities.

Fetal Programming is the belief that avoiding toxins, eating correctly and avoiding stress while pregnant can actually 'program' the fetus to be healthier than normal. This 'programming' can last into adulthood. And not just a little healthier. A lot healthier.

Probably we don't have one problem here...we have several. Stress is a big one. And I remember reading researchers found because of the stress of war pregnant women gave birth to more homosexual males. Interesting, hmm?

However, if this change is true (for whatever reason), it means feminism is self-limiting. These masculine girls and feminine boys aren't going to reproduce, which means they'll die off.

I could be completely wrong about these physical changes. Maybe I just never noticed them before.

But then, on the other hand, maybe I'm not. One thing I do know: the word "monster" is related to the word "demonstration." It's means a monster is a demonstration of something to come. Often, something worse.

What 'worse' could it be? Men create and maintain civilization and culture. Women don't do it. A rare one can, but overwhelmingly, no. When in power they destroy - think Betty Friedan and Gloria Steinem.

In other words, the more masculine women there are, and feminine men, the faster everything goes backwards.

Now that's something to think about.

couple A: man is dominant over woman

couple B: woman dominant over man

which couple will make more children and why?

if the woman is dominant then the woman controls sex

if the man is dominant then the man controls sex

if the woman controls sex then some sex happens

if the man controls sex a lot of sex happens

but introduce viable birth control (including safe abortion) into the equation and now which couple makes the most children and why? again, doesn’t take an einstein

plus if an oops pregnancy happens the guy in relationship A is much more likely to demand, and get, her to have an abortion.
none of this “i’ll stand by you whatever decision you make, dear” business for him!

now let’s suppose scientists have amassed a body of evidence from identical twin studies, and etc. that show that things like personality and behavior have a sizable genetic component

so this would imply that widespread birth control use will, over time, substantially alter the genetic demographic leading to fewer ‘strong’ men & ‘weak’ women and lead to more ‘weak’ men & ‘strong’ women

but how can evolution work so fast?

this shows that evolution can actually work quite fast when changes in just one or two genes can influence the expression of a whole cascade of others [e.g. a single mutant gene on the y-chromosome that affects the amount of testosterone leading to a less aggressive male, or a mutant on one of the x-chromosomes that promotes testosterone (such that the presence of 2 of them doubles the transcription leading to a female that is more aggressive than if she'd been born a male instead)]

here's a guy with similar ideas

Selection bias. They were always there you just weren't paying attention. I see the same number of soft looking guys and hard looking women that I did in the 70s.

Coinciding with the psycho-social factors prevalent during the last four decades has been a stunning increase in the amount of phyto and Xeno estrogen exposure. These toxic mixtures are likely the explanation for what you have been witnessing.