Have Gun Will Travel

"A strong body makes the mind strong. As to the species of exercises, I advise the gun. While this gives moderate exercise to the body, it gives boldness, enterprise, and independence to the mind. Games played with the ball, and others of that nature, are too violent for the body and stamp no character on the mind. Let your gun therefore be the constant companion of your walks." - Thomas Jefferson in a letter to Peter Carr in 1785

The phrase "Have Gun, Will Travel" comes from an early '60's TV program called "Paladin," starring Richard Boone. I only caught it in reruns, but find it better than I thought it would be, since Paladin was a bit of a philosopher. 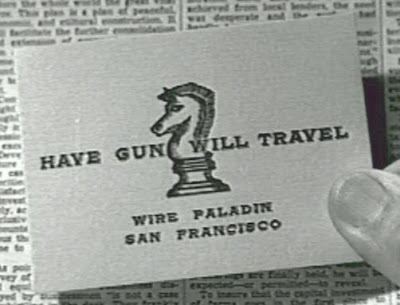 When I was 12 years old my father bought me a .22 single-shot rifle and a box of ammo. My friend John and I walked down the railroad track carrying the .22 (which had a telescopic sight) set up some plastic milk jugs filled with water, and then blew them up.

I was one of the party guys in high school. Cruised on weekends, got high, went to parties, drank. I had a great time.

But one of the best times I ever had, better than getting high, was when John and I would wander the woods on the weekends and shoot that rifle.

Jefferson said he did the same thing, and I know what he was talking about

I'm not a sports fan. Never have been, could not care less about any of them. I'm not an athlete, never have been, despise sweating. I walk, swim sometimes, have a bike I use when the weather is nice.

I'm not a hunter but I think one of the reasons guys hunt is so they wander the woods with a firearm. Even if they never bagged any game just walking around with a gun is good enough.

And now liberals, who I think are emotionally four years old, are trying to get rid of firearms. Ultimately they want to get rid of all of them, including those used for hunting, even single-shot .22 rifles that 12-year-old boys use to blow up milk jugs.

John and I were not damaged in any way by wandering the woods with that rifle. Actually it was good for us. I found what we did both exciting, absorbing and ultimately, peaceful.

The more firearms are taken away (which isn't going to happen) the less boys are going to be boys. It's bad enough so many are so fat and diabetic from playing video games all the time.

Firearms are a boy's best friend. For that matter, men's, too. And ultimately, society's.