I have recently expended all several of my brain cells (admittedly they are very large brain cells) on the problems of spinsters. Why? Because there are a lot and there are going to be more. "More" as in "every day." (Forty-nine percent of all people in the U.S. are unmarried and soon it will be 50%.)

I used to define these kinds of women as "hostile and bitter middle-aged women, on psychiatric drugs, who blame all their problems on men because they don't have home, husband and children, so they con themselves with their pathetic 'careers,' the money from which they spend on clothes and make-up to cover up the fact they've lost their looks, and also on cats which are substitute children because their ovaries have shriveled up." 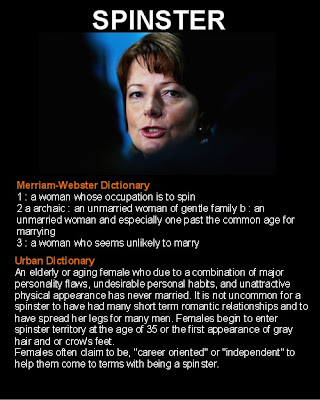 Incidentally,the New Oxford American Dictionary says, "...spinster cannot be used to mean simply ‘unmarried woman’; it is now always a derogatory term, referring or alluding to a stereotype of an older woman who is unmarried, childless, prissy, and repressed."

Then I realized the word "spinster" is one word that pretty much takes the place of my paragraph-long definition.

I have met several spinsters in the past, and even then knew their problems were basically with men, but I didn't connect their disturbed characters with the word "spinsters."

The ones who are really outrageous always stay in your mind.

About four years ago I had a rescue pug. During the summer I shaved his fur to within a millimeter of his skin, and when I took him in my van I always kept a gallon of ice-cold water with a bowl on the floor, had ice-cold A/C (so cold it was painful) and when I parked I kept the windows down and parked in the shade. I never left him in the van more than about eight minutes.

Any dog can handle a bit of heat, even 95 degrees, for several minutes with no problems. If they couldn't handle it, they would have died out a long time ago.

For that matter, the only time a dog is in heat-distress is when he starts drooling.

I left Mickey in my van for about seven minutes while I had to go inside a hospital. When I came out I noticed the driver's door to my van was ajar. That puzzled me, because I could have sworn I had shut it completely.

Turns out I had.

About 15 feet from my driver's door was a woman, clearly in her 40s, with wrap-around sunglasses (always bad) and a cell-phone in her hand. She appeared to be glaring at me. She was way too thin and had a bony unattractive face.

I had some red flags, but I had no idea what was going on. I learned.

As I opened my door she said, "Is this your van?"

I thought, what a dumb question. Did she think I was going to get in the van and see if my key fit so I could steal it?

"I called the police because you left your dog in there."

This days I would have said, "Your problem is that your a scrawny unattractive spinster with no home, husband and children, and you will never have them. And getting off of the psych meds would help, too." Then I would have smiled, got in my van and drove away.

Instead I told her, "The police will do nothing." And they wouldn't. They get calls like this all the time and take their time getting there because they know 99.999999% of these calls are not legitimate and they know the people will be gone when they get there.

Then I told her she knew nothing about me or my dog (which she didn't) and she should mind her own business (which she should have).

Of course she continued to run her mouth ("Wait until the police get here, blah blah blah"). What did she think they were going to do? Arrest me? Take my dog? Tow my van? What they would do never occurred to her. Her mind was too fuzzy and she couldn't see that far into the future.

I forgot what else got said, but I finally called her a fucking stupid cunt.

That got her (you never find the truth until you push the envelope). Her eyebrows shot up, her mouth popped open, and she took a step back. Then she screamed at me, "You're no gentlemen! You're not married!"

Bingo. She was right; I am no gentleman. Especially with hostile and bitter women. What made her think any man would be a gentleman with a woman like that?

What really stuck me was the comment, "You're not married!" (Was the first thing she did was to check my left hand?) That proved she had men problems, and that's what the whole scene was about. She wasn't married, had never had been, or was divorced. And being middle-aged, scrawny, with a permanently hostile look on her face, is there any wonder she was alone?

At that time I had defined her with my long definition that I used before. Now, I just call them "spinsters."

They also misperceive everything, the way this woman completely misperceived the situation with my dog and me. I think the psychiatric drugs (I can't call it "medication") is what makes them misperceive things.

So here is one way to identify a spinster: middle-aged, hostile, self-righteous, scrawny, tries to cover getting old with clothes and make-up, blames her problems on men, on psychiatric drugs. When you see a woman like this: Red flag! Red flag! Run away!

I've also noticed the drugs make them cry out in their sleep. Nightmares, I guess. They also say one thing one time and the exact opposite another. And see nothing incongruous about it. And they lack self-awareness of their problems. I suspect the drugs have a lot to do with that, too. It's not like someone is supposed to be on psychiatric drugs for decades.

And I'll bet if they cops showed up, the self-appointed pug rescuer gave them my license plate number. Which I'm sure they threw away.

I never heard a thing from them.

By the way, the reason my door was ajar is because she got in my van. Even though the windows were completely down.

A lot of women expect a pussy pass. I quit that a long time ago, which is why I called this crazy woman a cunt to her face. She thought she was supposed to get a pass on her behavior. Nope.

Some people can dish it out but can't take it. That's probably the shortest definition that exists of a spinster.