Leonhard Euler? Who's That? 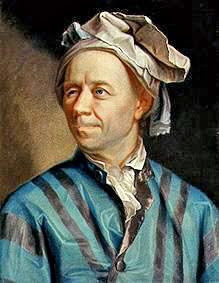 Everyone knows who Einstein was, but there were (and are) people a lot smarter than him. One of them was Leonhard Euler, who is barely known today, and he was right up there with Isaac Newton.

Leonhard Euler (English approximation, "Oiler") (April 1707 – 18 September 1783) was a pioneering Swiss mathematician and physicist. He made important discoveries in fields as diverse as infinitesimal calculus and graph theory. He also introduced much of the modern mathematical terminology and notation, particularly for mathematical analysis, such as the notion of a mathematical function. He is also renowned for his work in mechanics, fluid dynamics, optics, and astronomy. Euler spent most of his adult life in St. Petersburg, Russia, and in Berlin, Prussia. He is considered to be the preeminent mathematician of the 18th century, and one of the greatest mathematicians to have ever lived. He is also one of the most prolific mathematicians ever; his collected works fill 60–80 quarto volumes. A statement attributed to Pierre-Simon Laplace expresses Euler's influence on mathematics: "Read Euler, read Euler, he is the master of us all."

I unfortunately have no natural talent in math, which is irritating because I really wish I did. I have a friend who has a M.S. in Math and who is a musician. It turns out that when children are taught music they're better at math. So, of course I have no natural musical talent or natural mathematical talent.

I heard nothing about Euler in my 12 year prison sentence in public schools. Now why is that? And I'm sure nothing is taught about him today.