One Egg is Worth a Thousand Words 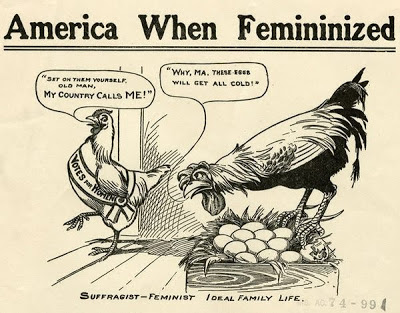 I don't know when this was drawn but it appears to have been in the early 1900s, when women were agitating for the vote.

Even in those days some women didn't want women to have the vote, saying it's more important for women to raise children to be great people instead of wasting their lives in politics (think Diane Feinstein).

You can have one, or the other. You really can't have both. Unless, of course, you give your kids to someone else to raise. In that case, why bother having kids?

I do know one couple with kids who have essentially dropped out of the rat race. They live in a trailer in a rural area. He works part-time, since sometimes it's not worth working full-time.

She home schools the children, a lot of which consists of taking them for walks in the woods and showing them things and explaining them (sounds like kid heaven to me, since I spend 12 years in public school hell).

When society goes bad (courtesy of the Black Thing known as the federal government) you have to improvise and adjust to make your life work. That seems obvious to me but apparently not to a lot of people, who still try to follow the traditional model. At least until it collapses around their ears.