Wandering through the Woods at 12

I didn't hate school. I was bored by it and so daydreamed. There were several notes on my report cards (which I still have) about this, about how I was not "fulfilling my potential." I still don't know what the teachers meant by that.

The only time I was semi-satisfied and content was when on weekends I wandered the area I was raised in - the lake and the woods. The things I saw - not only about a million tadpoles, but huge ones I realized later turned into mudpuppies. Bamboo. Wild onions. Snapping turtles (which have some sort of samurai armor). Cottonmouths and moccasins (same snake, really). Catching crawdads on a string with bread dough at the end.

What I did, I did in every season. What I noticed, even at 11 and 12, is that everything went in cycles. Winter, spring, summer, fall, winter. Growth, maturity, decline, death...repeat. I first noticed it with plants, which were tropical-lush in the area I was raised.

I figured there were people just like me in the past. Take astrology. The only way anyone could figure this out was to sleep during the day and stay up all night studying the stars, the way I stayed up all night down at the lake, lying there with friends, waiting for meteor showers.

Why did some of the lights in the sky waver? Wait - those are stars, which the atmosphere made twinkle. The big bright ones that didn't waver? Turned out those are planets.

Now imagine doing that for years, thousands of years in the past. These days, how many people know the difference between a new moon and a full moon, or which fingernail shape of the moon indicates a coming full moon or new moon? I know the difference.

I've also known for years the word "meek" that Jesus used in the New Testament really translates as "humbly observant." 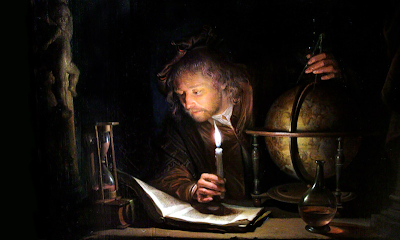 That painting? "Astronomer by Candlelight," by Gerrit Dou. Notice the absorbed expression on his face. I don't see that expression that much anymore. I often have it, which is one of the reasons so many people think I'm strange.

That astronomer is an introvert. The expression says it all.

I've for years thought there was a war between smart introverts and the most stupid of extroverts. Some, such as Tex Arcane, don't even consider stupid extroverts to be human. To him it's Homo Sapiens (extroverts) vs. Neanderthals (introverts). When I was growing up I thought certain people were trying to kill me.

Whether or not they are literally right is not the point. The point is that when you are an introvert, the worst of extroverts don't even appear to be quite human to you. They're closer to monsters. Insane ones.

Public schools don't help things. They make it worse. Sometimes, a lot worse. They've gotten so bad they should be closed down. There is no competition, and it's competition that makes things better.

I'd like to see schools strictly for introverts. I'd be interested in seeing what they could produce when they grow up.