I Pine For The Old Men's Magazines

My father had a subscription to only one magazine: True. I was about 11 years old, and I still have one of his magazines. This one: 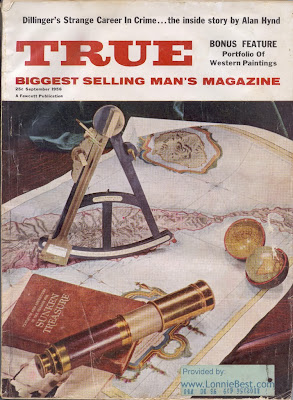 I was driven to distraction by school but I was certainly interested in my father's magazines. It absorbed me, something that school never did.

I remember one article about a guy who hunted bears with a .45, another about Joseph Merrick, the Elephant Man, and one about Phineas Gage, who had a iron rod go though his head - and lived. 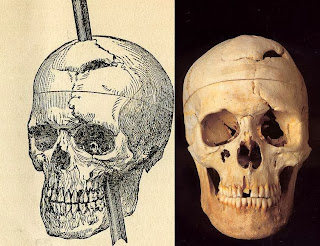 Do I miss that magazine! I even enjoyed the ads. 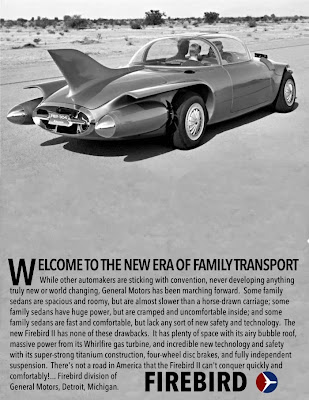 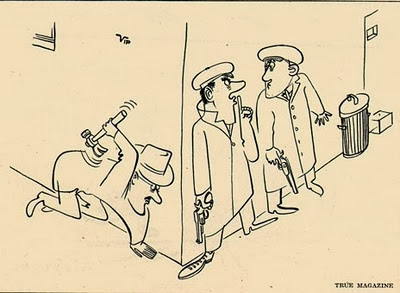 True ceased publication in 1975, and oddly, that pretty much coincides with this country starting to go downhill (wages stopped going up in 1971). That magazine was a model for young men, and since art imitates life, the loss of that particular magazine, with its emphasis on high adventure, sports profiles and dramatic conflicts, was not a good thing.

I don't see anything like the old men's magazines these days, and I don't know why. But I sure learned a lot of history, such as an article about Benjamin Butler, a real sonofabitch of a carpetbagger, although the history books have whitewashed what he was really like.

I also remember one about Merrymount, which could be considered the first Civil War in America.

I found a quote about it: "The inhabitants of Merrymount ... did devise amongst themselves to have ... Revels, and merriment after the old English custom ... & therefore brewed a barrell of excellent beer, & provided a case of bottles to be spent, with other good cheer, for all comers of that day. And upon Mayday they brought the Maypole to the place appointed, with drums, guns, pistols, and other fitting instruments, for that purpose; and there erected it with the help of Savages, that came thither of purpose to see the manner of our Revels. A goodly pine tree of 80 foot long, was reared up, with a pair of buckshorns nailed on, somewhat near unto the top of it; where it stood as a fair sea mark for directions, how to find out the way to mine Host of Ma-re Mount."

The Puritan Gov. William Bradford wrote this in his History of Plymouth Plantation: "They ... set up a May-pole, drinking and dancing about it many days together, inviting the Indian women, for their consorts, dancing and frisking together, (like so many fairies, or furies rather,) and worse practices. As if they had anew revived & celebrated the feasts of ye Roman Goddess Flora, or ye beastly practices of ye mad Bacchanalians."

In fact, the killjoys were so infuriated at these merrymakers that Miles Standish and his troops invaded the place, seized the leaders and sent them back to England. The Indians were run off of the land, and the Maypole was chopped down.

What these people were doing was playing and partying, but for God's sake we can't have that! Got to work your life away!

There are men's magazines for specific things: Field and Stream and Popular Mechanics, for example (I also found the writing in Playboy was impeccable). But I am not familiar with any light men's magazine. But what can be considered a general men's magazine, such as Esquire, is just way too earnest and serious.

Most of the men's magazines in the past were geared toward the middle-class. Now they are targeted to manginas from New York, who are obsessed with expensive clothes and cars. Ugh.

I'm kidding here, but if I was to open up a men's magazine I'd ask two or three smart 12-year-old boys what they thought was interesting. I suspect it would make for a pretty interesting and successful magazine.

I remember reading my father's True Magazines, also, circa 1965. was a pretty good magazine, with content OK for me at age 12.

One story I remember to this day was how television programs and advertising portrayed American men and husbands as idiots and bumbling man-children. As examples, they cited, IIRC, "F Troop", "The Dick Van Dyke Show" and many others.

Many things have changed since the mid-sixties, but not the portrayal of men on TV.