I Am Now a Trillionaire 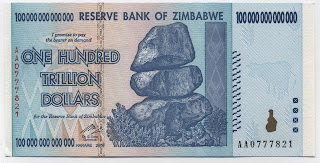 I wonder if the people there are begging the white man to come back? "Give me job, boss!" Or would they rather be poverty-stricken as long as they are free of the White Debbil?

It's not so strange to me that many on this planet are trying to drag the white man down, including some white women. After all, the white man created/discovered almost everything in the world, and some can't stand that.

It's envy, and one of the worst things about envy is that those who envy will willingly destroy themselves if they can also destroy those they envy.

I have you beat! I have two 500 Trillion (Zimbabwe) dollar bills!

But, from what I heard, right after the $500 trillion bills were issued, Zimbabwe's government simply gave up and abandoned issuing money at all- the people use whatever currency they want to accept- and now the economy is booming.

Don't mainstream academics in economics always write articles telling us how great inflation is all the time?