I've always wondered why my pug loves peas and greenbeans. 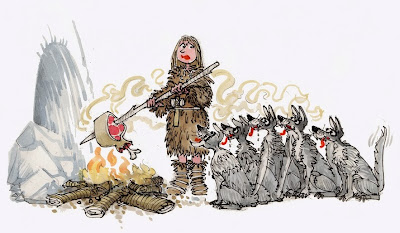 Here’s a possibly true story about the first friendly dog. It’s dusk on a human settlement some ten thousand years ago. After a long day of farming, a family gathers around a campfire. They’re kicking back with hunks of venison (a rare treat), some corn, bread, maybe even a few cups of mead. Suddenly they hear rustling coming from the shadows. They turn around and see the glowing eyes of a wolf.

The people are surprised, maybe, but not scared. For many years they’ve noticed an odd group of wolves loitering just outside the village, rummaging up food scraps from the dump pile. The animals have never caused any harm and keep to themselves. But this is the first time a wolf has dared to come so close. It slowly approaches the fire, sits down, and cocks its head. Somebody tosses out a bit of bread.

As a recent dog owner, I love this story: Dogs are the wolves that mooched. They needed us, approached us, and ultimately wooed us into being best friends forever. This is a popular scientific theory — the ‘scavenger hypothesis’ — of how dogs came to be. But it’s not the only one, not by a long shot.

Treats, do you have treats?!

Another theory says that people went out into the woods and deliberately trapped wolf pups, with the goal of training them to be sentinels or hunters. Still other scholars say the co-evolution of wolves and humans was mutually beneficial, with humans learning to hunt by watching wolves. “There are as many specific scenarios as there are people working in this field,” says Bob Wayne, professor of evolutionary biology at the University of California, Los Angeles. “We’re looking back at such a long time ago, it’s a matter of speculation.”

Most genetic evidence says that dogs emerged in the neolithic period, just as humans were transitioning from a hunter-gather lifestyle to one of agricultural settlements. But some dog fossils are much older, dating as far back as 33,000 years ago. Where canine domestication happened is also up for grabs. It could have been in the Middle East, China, Siberia or several places at once.

Erik Axelsson and colleagues at Uppsala University in Sweden tried to learn more about the evolution of canines by comparing the genetic sequences of modern-day dogs and wolves. As they report today in Nature, dogs show distinct differences from wolves in genes involved in two key functions: brain development and starch digestion.

The researchers combined samples from 60 different dogs of 14 different breeds, from the shaggy bearded collie to the super-short drever to the svelte and wolf-like Swedish elkhound. They sequenced different parts of the genome in each one, and then merged them together to create a master ‘dog’ reference. They compared this to a master ‘wolf’ genome based on samples from 12 wolves in seven different countries.

Some 36 regions of the genome carry different variants in dogs and wolves, the study found. Each region is relatively large, encompassing three or four genes, but only one gene in each region is likely responsible for the difference, Axelsson says. Of the 122 candidate genes identified, many have similar biological roles. For example, eight of the genes are involved in the development of the brain and nervous system.

Brain development genes are interesting because of the well-known behavioral differences between dogs and wolves — namely that wolves turn out to be aggressive and dogs don’t.

“Wolves and dogs are actually quite similar when they’re very young: They both do the same playful behavior, run around in circles, and generally look cute. Little wolf puppies will even bark like a dog,” says Nicholas Dodman, a professor in the veterinary school at Tufts University. “But suddenly the wolf grows up and becomes aloof and lean and suspicious.”

Many animals seem to take on a more juvenile state as they are domesticated, getting bigger eyes, smaller faces and less aggressive demeanors. “One common way of achieving a domesticated form of a species might be to slow down the development of the animal,” Axelsson says. “So the finding here, that it’s the development of the nervous system that’s affected, gives some support to this theory.”

Most of his new study, though, is devoted to digestion genes. Dogs break down starch in three digestive stages, and the researchers found genetic differences related to each. Their strongest example hinges on AMY2B, a gene that in makes alpha-amylase, an enzyme in the pancreas that helps convert starch into maltose. The wolf genome carries 2 copies of AMY2B, whereas dogs carry anywhere from 4 to 30 copies. What’s more, the researchers found that alpha-amylase levels are 28 times higher in pancreatic tissue from dogs and nearly five times higher in blood.

Dogs, in other words, evolved a mechanism for digesting starches that wolves don’t have. “This was the big surprise. No one had anticipated it,” Axelsson says.

Axelsson says his findings fit well with the scavenger hypothesis. If wolves had wanted to get human food, they would have needed to evolve both trusting behaviors and mechanisms for digesting starch. “Selection pressures to change both the behavior and the digestive system may have been happening at the same time,” Axelsson says.

Other experts point out, though, that these changes could have easily come about at different times. It’s possible, even likely, that wolves started hanging around our dumps a few thousand years before we had any starches to speak of. In order to know for sure, future studies will need to compare DNA from a wider range of dog breeds as well as from dog fossils.

Amidst all the speculation, I’m taking two broader points from this study. One’s a practical tip for dog owners. Should you try that trendy (and expensive) raw-meat diet? “This suggests no,” Wayne says. “Dogs have special digestive equipment for handling carbohydrates.”

The second is that dogs can teach us about our own history and genetic evolution. Get this: Human studies suggest that we, too, picked up extra copies of the alpha-amylase gene during the agricultural revolution. “We have evolved, co-evolved, in parallel to the same environmental change, which was the development of agriculture,” Axelsson says. “It makes you realize how big a change it must’ve been.”

Out of all the animals, the one animal who chose the side of Man against Nature.

It is funny to imagine they adopted us.

"Many animals seem to take on a more juvenile state as they are domesticated, getting bigger eyes, smaller faces and less aggressive demeanors."