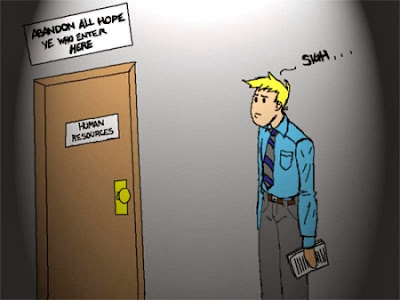 I worked for myself for many years, and before I did, when I applied for a job, there was no "Human Resources." One hospital had an office where you applied for jobs, but it was run by a man (who graduated high school but did not go to college) and every other business I applied to, it was generally the owner who did the interviewing.

Then, in 2009, the economy went kablooey, and I had to work for others until I was able to open my own business.

I was asked some of the most bizarre - and worthless - questions. "Do you smile a lot? Could you give me a percentage?" What? Are you retarded? They were speaking gibberish! And I would never recommend such companies to anyone seeking a job.

I can't remember any of the other questions, but I knew that asking such stupid questions meant the interviewer had no idea how to find people who fit the job. I could do better than they did.

My father, who was a general contractor, did a better job than these ditsy women. "Can you use a hammer to nail two boards together? Do you have enough sense to not get badly injured or killed? You do? You're hired."

Now it's all dipshit degrees and certifications, which mean nothing, except for conning the naive.

I knew one young man, who was a fine worker and who I would have hired, get kicked out of a necessary class because he could not pass the tests. His IQ wasn't all that high (I would say about 98), but he was a very good worker. But he was filtered out because he couldn't do the schoolwork, which was worthless for the job.

These "Human Resources" departments are going to go away, and not soon enough. They are filtering out the talented people who are good fits for the job. I will never interview with one again.

And women should not be hiring anyone.

You think HR is going away? I hope you're correct but with regulations and sexual harassment training seeming to gain stronger footing, I don't see it happening in the foreseeable future.

I have worked for several large (multi-billion revenue dollars) companies in my 35 years of sales. I have never been interviewed by anyone in HR. All interviews were conducted by the sales managers and their bosses. Not sure why sales is the exception to this.

I only ever worked for one employer that had an HR office. I liked the job (pickups/deliveries in a refrigerated truck), but felt like I was walking on egg shells every time I entered the building. I left a couple of months ago and got back into a taxi where cash is King and personality eight a pinch of salt is expected.

Spotted your write – ups, it’s cool. Very beneficial and interesting there are some ideas I haven’t heard before. Thanks for sharing.

I'm impressed. You're truly well informed and very intelligent. You wrote something that people could understand and made the subject intriguing for everyone. I'm saving this for future use.

Love it! Very interesting topics, I hope the incoming comments and suggestion are equally positive. Thank you for sharing this information that is actually helpful.

I really enjoyed reading your article. I found this as an informative and interesting post, so i think it is very useful and knowledgeable. I would like to thank you for the effort you have made in writing this article.

Smile since it is indeed the best medicine especially to a broken heart and don't stop inspiring us, your readers with your wonderful posts. Visit my site for more information and have a good day. Cheers.

This is a great article for my research. Keep posting. Thank you.