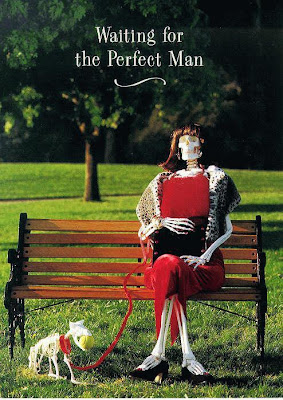 I like the ball in the dog's mouth. I think it should be a cat, though.

Since women want the perfect man, when they can't find him, they hit the Wall (sometimes so hard their heads come out the other side). The Wall starts at 27, in my view. The Wall is when they run out of rationalizations and suddenly realize they're going to end up 50 years old, without husband, home and children, on anti-depressant and anti-anxiety "medication," living alone in an apartment with a cat or a big male dog to protect them from all the rapists and molesters and lechers they hallucinate are after them.

Problem is, most women nowadays never become adults. They are perpetually teenagers...

Women today are in a state of arrested mental development. Also a state of feminist-induced psychosis, is it any wonder that they don't know shit from Shinola? And don't forget the media that manipulates these infantile minds at will and why would we expect anything less than total and complete morons?

Gay men write the scripts and the naive women eat it up. What a society.