All You Need is Edgar Rice Burroughs 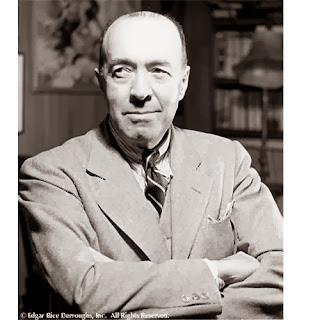 Perhaps the first thing I noticed about Burroughs is that, much like Robert Heinlein, none of his women characters are victims.

That's no surprise given Heinlein was another huge Burroughs fan.

There was a time when fiction, both light and serious, taught classical virtues and values, although perhaps not by name.

Now we can't even get decent decadence anymore with Fifty Shades of Grey having displaced The Story of O and emptiness having replaced Burroughs, Heinlein, and others.

Whoo-Hoo! Another doozie! I've reblogged it here, and made one of my best quibcags so far out of a quote from it.
http://ex-army.blogspot.com/2013/11/bob-wallace-is-erbivore.html

ERB was the greatest. LIke you, I discovered him when I was 11, and by the age of 12 had read almost al of the Tarzan, Mars, and Venus books.

Until I read your post, I'd never really thought about what influence ERB had had on this impressionable young boy and his future attitudes; but he must have. There's no way you could read about Lord Greystoke and not come away with a sense of, that's how a man is supposed to be.