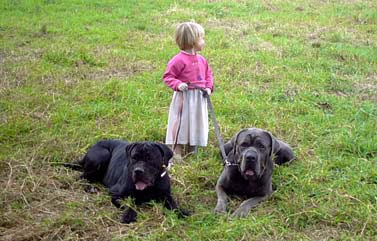 "The bond between dogs and humans was forged in Ice Age Europe and is thousands of years older than previously thought, a study suggests."

Dogs first became man's best friend in Ice Age Europe up to between 19,000 and 32,000 years ago, scientists have discovered.

Genetic evidence analyzed by Finnish researchers found that the wolf ancestors of modern dogs were most likely tamed by hunter-gatherers thousands of years earlier than previously thought.

The findings, published in the Science journal, contradict an earlier belief that dogs were domesticated in eastern Asia after the origin of farming about 15,000 years ago.

Researchers from universities in Finland and Germany studied the DNA of various modern breeds of dog, wolf and coyote and compared it against samples from fossils of ancient wolf-like and dog-like animals.

They found that DNA from domestic dogs was most closely related to that of ancient European wolves as well as modern wolves, and there were few similarities with wolves, coyotes and dingos from other parts of the world.

It was previously thought that humans and dogs most likely forged a bond after the beginning of agriculture, when dogs may have been attracted by a plentiful food supply.

But the new findings suggest the canines may have sought out the camp sites of fur-clad hunter-gatherers in the hope of scavenging leftover meat and been tamed to help with hunting or protection against predators.

The scientists wrote: "Conceivably, proto-dogs might have taken advantage of carcasses left on site by early hunters, assisted in the capture of prey, or provided defense from large competing predators at kills."

Olaf Thalmann of the University of Turku in Finland, who led the study, said: "I was amazed how clearly [the findings] showed that all dogs living today go back to four genetic lineages, all of which originate in Europe."

Neat one! I have a thing about dogs. Reposted with some related stuff and a quibcag here:
Dogs are more than pets — they're friends/symbionts.