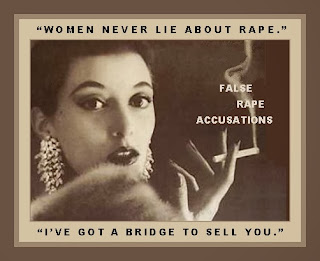 My mother worked for years as the night admitting clerk in the ER at the local hospital. One time, when I was about 21 or so, I asked her how many of the rape victims she worked with hadn't been raped.

She told me 90% of them were false accusations. I didn't say anything, because I didn't know what to say.

Later, there was the case of Mike Tyson, who is dumber than a box of rocks. Yes, I do believe he did rape his victim, but she didn't claim rape for a few days. Why? Because Tyson didn't call her the next morning. If he had, she would have never claimed rape. And he unjustly went to prison because of her self-delusion.

You doubt that? I know a woman who told me when she was 17 some guy threw her on a bed and jumped on her. She was yelling, "What do you think you're doing? You're not going to touch one square inch of my flesh!"

Then she told me she saw him for several weeks after.

Sometimes, it's only rape if he doesn't call the next day.

I'm no Julian Assange fan, but that's evidently what happened to him in Sweden, where the rape laws are even more onerous than they are here.