People Who Aren't Quite Alive 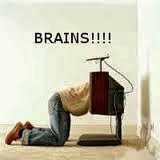 My experience has been there are at least three kinds of people who I don't consider to be quite alive.

The first are those who watch TV all the time. Watching some TV is okay, but I know people who do nothing but watch TV. There aren't enough good TV programs in the history of the world to support that.

I have found that people who watch a great deal of TV don't have much of a life. They appear to be hypnotized by that screen. They remind me of zombies.

I have never watched much TV, even as a kid. About the only thing I remember consistently watching were Saturday morning cartoons. Even as a teenager I remember walking by people's houses at night and being horrified by that blue glow coming from living rooms. I remember thinking, "This is how they're going to spend their entire lives? Staring at a screen?"

Back in 1978 a former advertising executive named Jerry Mander wrote a book called, Four Arguments for the Elimination of Television. His arguments boiled down to four (from Wikepedia):

1. While television may seem useful, interesting, and worthwhile, at the same time it further boxes people into a physical and mental condition appropriate for the emergence of autocratic control.

2. It is inevitable that the present powers-that-be (or controllers) use and expand using television so that no other controllers are permitted.

3. Television affects individual human bodies and minds in a manner which fit the purposes of the people who control the medium.

4. Television has no democratic potential. The technology itself places absolute limits on what may pass through it. The medium, in effect, chooses its own content from a very narrow field of possibilities. The effect is to drastically confine all human understanding within a rigid channel.

While I don't agree with the elimination of television I do consider the point that too much can only have deleterious effects. I'd go with the Greeks on this one: everything in moderation.

The second kind of people are those who try to be busy all the time to fill their empty lives. Some of them think "being busy" means they are productive. What they're doing is the exact opposite of productive, because they aren't producing anything.

The third kind are those who fill their lives with drama - who make trouble - because it also fills their empty lives.

These are the kind of people who have no true meaning or importance in their lives. They're lost people who seek those things but have no idea how to go about doing it.

I'm not quite sure how our society ended up this way, but one thing I do know is that many people take the easiest path - the easy way out.

A few years before his death, my grandfather became increasingly captivated with watching TV. To see a man involved in card playing and socializing turn into a couch potato staring slack-jawed at the boob tube was depressing. I wasn't surprised senility followed shortly after, as he stopped exercising his brain.

I've not had a cable subscription in years. It was weird cancelling it, as it was a staple of my life. No regrets, so far.