Cosmodemonic Transnational Megacorporations are Creations of the State. They are Your Enemies 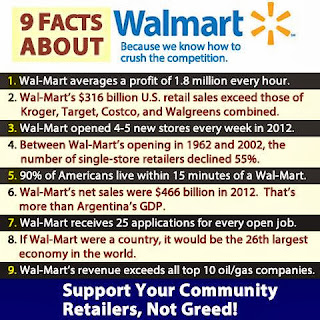 Six members of the Walton family hold more wealth than the bottom thirty-three per cent of Americans.

Fact is, Wal-Mart's pay is so bad that that a majority of their employees are on government doles. In other words, American taxpayers are subsidizing Wal-Mart.

For that matter, we're subsiding McDonalds and any place of "employment" where the workers get some sort of taxpayer assistance.

No worries here: I haven't shopped at Wal Mart for YEARS.
No sense in keeping a business that sells lower quality merchandise in business.