A World of Man-Hating Dykes 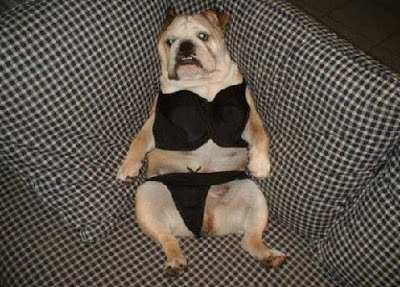 The science fiction writer Norman Spinrad, back in 1979, wrote a satire, A World Between, about what he called “the Pink and Blue War,” a war between the Femocrats and the Transcendental Scientists.

In Spinrad’s world, the Femocrats were not surprisingly lesbians who kept a few broke-dick males around, apparently in cages, for breeding purposes. They wanted to take over every world and impose their lifestyle. For that matter, so do the male Transcendental Scientists, who consider most women irrational and ruled by their feelings, and themselves to be utterly rational (and oh were they a bore with their Aspie/nerd/geek personalities).

One of the reasons I like science fiction is that is does all the heavy mental and imaginative lifting for me. There have been other science-fictional worlds without men. Keith Laumer wrote a funny one called “The War with the Yukks” (the Yukks being men) and John Wyndham wrote a serious one called “Consider Her Ways” (not surprisingly, both female-dominated societies were ant-like).

To do our thought experiment, we’ll have to ignore the fact a world of man-hating lesbians could not exist. In fact, a world of women could not exist, just as a world of men could not exist. As the humorist P.J. O’Rourke pointed out, without men civilization would last until the next oil change (I once saw two women pour a quart of oil down the carburetor of a VW Bug, another one try to start her car by hitting the battery posts with a hammer, and still another who thought oil was supposed to be added only when the red oil light came on).

Men, specifically white men, have been responsible for discovering/creating about 97% of everything in the world.

A world of lesbians, with no men, would be running on the fumes of the scientific achievements of men. If they ever learned to reproduce without men, it would be men who achieved that, not them.

In all of recorded history, if there has been one lesbian who has achieved anything except complaining how men are oppressing women, I don’t know what it is. Even though the late Medusoid Betty Friedan and the still-alive-but-addled Gloria Steinem was/is not lesbian, what have they done except run their mouths and tell naïve women want to do (even though neither women followed their own beliefs)?

I’m sure there are a handful of man-hating atheistic nihilistic socialist/radical feminist New York lesbians who do fantasize about a world with no men. Valerie Solanis, who shot Andy Warhol, wrote tracts about how fetuses are originally female and went so far as to found SCUM (Society for Cutting Up Men). She said men were a biological mistake and dreamed of a world in which women reproduced without them. But that was in the Sixties and Valerie died in an insane asylum.

Robert Sheckley in 1960 wrote a short story, “The Girls and Nugent Miller,” in which after a nuclear war there is apparently only one man left, a pacifist college professor who drove an ambulance on the front lines during a war.

He encounters a group of naive young girls, under the domination of a brutal man-hating lesbian (with a square chin and frizzy hair), who claims men are primitive violent brutes responsible for every problem in the world (which is exactly what the Femocrats claimed, so what we’re dealing with here is the most tiresome of clichés ), so she’ll learn to reproduce without men and drives Miller away with a spear and stones – after calling him a coward when she found he was a pacifist. She apparently had no clue she was hateful, violent and murder-minded – and Miller was the exact opposite.

Miller realizes he no longer can be a pacifist, and so picks up a club and heads back into camp to brain the gruesome dyke who tried to murder him. After that, the last line of the story tells us, the young women are in for a big surprise.

Perhaps such a feminist/dyke world would shudder at the idea of pregnancy, so babies might be grown in artificial wombs, as was done in Brave New World or the TV program, "Space: Above and Beyond."

Contrary to the myth, many lesbian relationships are quite violent (for that matter, women are responsible for half of all domestic abuse, two-thirds of all child abuse—and little boys are twice as likely to be abused as little girls). So we’d have a violent world of tattooed crew-cut dykes growing female babies in artificial wombs. If you think the world is violent because of men (this is ignoring what women do) try a savage world of nothing but man-hating dykes. Without men to scapegoat, they’d turn on each other - probably with a combination of fingernails and hob-nailed boots.

Yech! What an awful world. I’m not even sure man-hating lesbians would like such a world, especially since without men technological society would collapse. What would they live in? Grass huts, as Camille Paglia suggested? Caves, like in the movie, One Million Years B.C. or the novel The Clan of the Cave Bear?

Since there would be no men, who would these man-hating lesbians blame their problems on? Each other, of course. They would also say, “We need another thousand years to overcome the oppressive legacy of the evil patriarchy that oppressed us for thousands of years.” The first defense most people engage in is to blame their problems on other people. It never works.

The world of which I write is an extreme one, a reductio ad absurdum, actually. There could be imaginary ones not as bad as the one I outlined. I could imagine one is which there are nothing but lipstick lesbians. The variations are endless.

But what all have in common is this: none of them could ever exist, because without men, there is no advancement, and in fact, no civilization. Not that the more self-deluded of women will ever believe that.

Not even remotely possible.

My daughter is gay; and the tolerance Nazis can kiss my ass - queers are not mentally healthy for the most part, and the vast majority of them are seriously disturbed - and I am perfectly willing to say so!

Sure, the odd ones can project an air of normalcy and adequacy - but hell's bells...you look at the floppy titted topless cankles at the pride parades. Look at the shrieking faggots waving rubber dildoes around. What goes on in the bath houses is not the doings of mentally healthy people.

If our race survival depended on dykes we would be extinct in 20 years and maybe less.

A world without men, what motivation would women have for getting out of bed, putting on makeup or competing with other women to snag a man themselves.

As for dykes with no men to compete with or try to emulate, where would they get there motivation.

Women left would copulate with the feminine females, leaving the dykes as the next beta orbiters picking berries and seashells to get a mate.