"...Wanting and Doing What is Best for the Other Person"

“Eros has degenerated; he began by introducing order and harmony, and now he brings back chaos.” ― George Eliot, Middlemarch


I have heard love defined as "wanting and doing what is best for the other person at all times." That's a pretty good definition.

I have been in love more than once. Three times, actually. What I felt, if I analyzed it, was an immense gratitude toward her. And I wanted the best for her, for her to be happy. And when I first felt it, I knew exactly what it was.

Yet I also thought, "This is amazing. It's so far above the normal world it's not even close."

It reminded me when I found out, many years ago, that eudaimonia means "well-being, human flourishing," the feeling of being alive, of having life more abundantly, being joyful. And that it was based on arete, excellence, liking and being good at what you do.

And what comes before arete? The Greeks decided it was Eros, which doesn't necessarily mean sex, or even love. It meant growth, the desire for union, the desire to create and discover, to invent.

Before Eros was Chaos, or formlessness. Eros is what binds everything together. Without Eros everything falls back into Chaos.

Not surprisingly, the word "religion" means "to bind together."

In love you want to have union with the other person, connection, to be "joined together," as in the marriage vows, which also includes "love and cherish." (The word "cherish" comes from the root word, "dear," as in "dear to me."

To cherish, to have it be dear to you, to wish and do what is best for the other person, gratitude...that's a pretty good definition of love. Not just a feeling, but a doing, action.

Abraham Maslow, who came up with this: 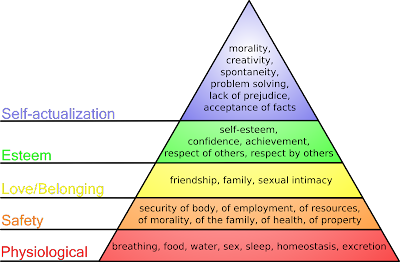 ...had some interesting thoughts about love.

He found there were two kinds of love "that correspond to a person’s orientation toward either 'deficit and repair' or 'growth and maturation.' 'Deficiency-love' is 'selfish love' or 'need-love,' whereas 'Being-love'—love for the 'being' of another person—is 'unneeding love' or 'unselfish love.' Being-love is not possessive and is admiring rather than needing; thus it is a richer, 'higher,' more valuable subjective experience than Deficiency-love. Deficiency-love can be gratified, whereas the concept of 'gratification' hardly applies at all to Being-love. Being-love has within it a minimum of fear. Being-lovers are more independent of each other, more autonomous, less jealous or threatened, less needful, more disinterested, but simultaneously more eager to help the other toward self-actualization and self-transcendence, more proud of the other’s triumphs, more altruistic, generous, and fostering. Being-love, in a profound sense, creates the partner, provides self-acceptance and a feeling of love worthiness, which enhances continual growth."

Again, it's what I have noticed: desiring the best for the other. And, again, Eros is about growth. The first kind of "love" is sometimes not even love: it's using the other person for sex, seeing them as a thing to satisfy base desires (the Greeks, among may others, noticed that those who devote their lives to physical pleasure become degraded).

I think it's pretty obvious that with the break-up of families, with single mothers, with vicious divorces...it's going to be the children who suffer the most. They'll grow up with little idea of what love is supposed to be. Oh, they'll know what sex is, of course, and try to fill their lives with it. But ultimately, they'll become degraded people - lost and lonely, looking for something they desperately want but cannot find...because they've never seen it.

Yep and nowhere is that more pronounced than in the 'Manosphere' - and this is one of my biggest beefs with it.

All these self proclaimed alpha males and pick up artists are nothing more than whipped curs. They have all kinds of advice on how men can defend themselves against women or take advantage of them and play them.

Good grief - the idea, boys - is to find a good woman and settle down to a good marriage. There are lots of good women out there looking for the same thing! But do any of the manosphere bloggers even THINK of serious relationships? It's like they're all stuck on stupid and some of 'em are so bad they could write for Jezebel.com if they had vaginas and wrote of women rather than men.

Classical marriage is a good deal for men and women - spiritually, financially and psychologically.

That's exactly what the article is about, but I decided not to use the word "Manosphere." I figure people would connect the dots, which is exactly what you did.