The Two Kinds of Strife 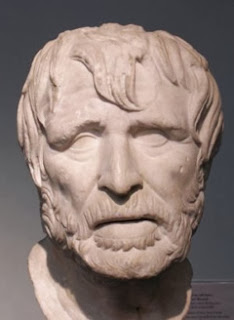 Hesiod, The Works and Days:

"It was never true that there was only one kind of strife. There have always been two on earth. There is one you could like when you understand her. The other is hateful. The two Strifes have separate natures. There is one Strife who builds up evil war, and slaughter. She is harsh; no man loves her, but under compulsion and by will of the immortals men promote this rough Strife.

"But the other one was born the elder daughter of black Night. The son of Kronos, who sits on high and dwells in the bright air, set her in the roots of the earth and among men; she is far kinder. She pushes the shiftless man to work, for all his laziness. A man looks at his neighbor, who is rich: then he too wants work; for the rich man presses on with his plowing and planting and the ordering of his state. So the neighbor envies the neighbor who presses on toward wealth. Such Strife is a good friend to mortals."


The first kind of strife was exemplified by Ares, the Greek god of war, who loved slaughter and destruction.

The second kind of strife is a bit more complex. It was exemplified by Zelo, who was the spirit (daimon) of eager rivalry, emulation, envy, jealousy and zeal. He and his siblings were Nike (Victory), Bia (Force) and Kratos (Strength).

Zelos may have been identified with Agon, spirit of contest, worshiped at Olympia. He was also sometimes equated with Phthonos the spirit of romantic jealousy, and was closely connected with the god Eris, strife as the driving force of competition.