“Compassion for animals is intimately associated with goodness of character, and it may be confidently asserted that he who is cruel to animals cannot be a good man.” - Schopenhauer 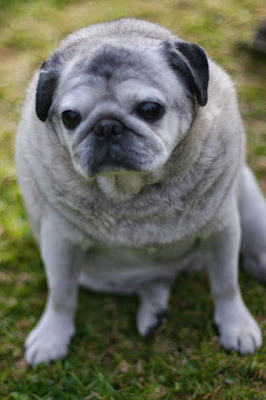 I have a 13-year-old rescue pug I got when he was seven. He had been abused and was psychotic. He bit me several times, hard enough to lay the skin open. It took me a year to turn him into a decent dog.

Now he's old and blind and deaf and incontinent. But I'll keep him until he dies.

Some people, when their dog gets like that, dump them at a shelter. Then pug rescues get them and make them comfortable until they die.

I don't understand people who dump their old dogs just because they're not happy healthy dogs anymore. If you don't want to deal with an old dog, then get a stuffed toy one.

I still miss our old dog! Even though she was crotchety and had indescribably bad breath and barked at the wind, I miss her. She died in my arms at the house she guarded so well, and I wouldn't have had it any other way. 15 years of a job well done ought to net you something in this life.

Good quote about peoples' treatment of animals reflecting on how they behave in other matters. People who are proven to be animal abusers should have their pictures published on newspaper and the nightly news.

I have held five beloved but terminal pets and told them I loved them while the vet gave the lethal injection. It never gets easier, but, sometimes you love them too much to see them suffer. Some decisions are a real pisser.

When you find your dog, you agree in advance to have your heart broken.

When you find your dog, you agree in advance to have your heart broken.

Yes. That's why I'll never have another dog.

I've had three pugs. When this one is gone, no more.

You're on the right track with dogs, Bob.

Not me, I will always have at least one dog around. I get mine from the SPCA too. When they pass I am just wrecked and I mourn but when I am finished - down I go again to look for the next recruit. I don't look at breeds, I look for attitude and carriage. My lead dog is a female shepherd/collie/alleycat mix, and my junior dog is a Pyranese (probably a purebred) stray I picked up at a rest stop along the highway in the middle of winter. He was half past dead when he crawled out of the bush and collapsed by my truck with no collar or ID. Today he is 92 pounds of hell in all directions!

It's a matter of self interest. My dogs are cheap exercise machines, they get me out of the house in the foulest weather. Fact is gents - dogs are darn good for the heart! And the head too! A man hurts himself by NOT having one around, IMHO.

Those are French bulldogs, which are like pugs with bat ears.