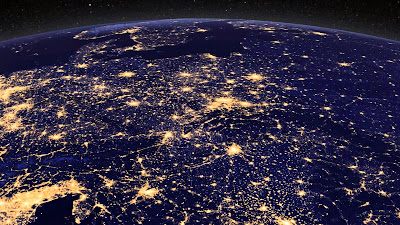 Many years ago I read Brand Blanshard's Reason and Analysis and was struck by his definition of reason: making connections between ideas (I paraphrase here).

He's right. There is no such thing as an Ayn Randian lone genius. Everything is connected to everything else, and everything we do is built on what came before.

The more connections between ideas we make, the more society can advance. Which mystifies me, since governments want to censor just about everything, as does every ideology. These days the PC crowd is the worst, since they want to stomp out of existence every idea they disagree with.

That's what's so amazing about the internet. It can be considered a gigantic, world-spanning brain. I sometimes think of everyone involved in it being a cell.

Think of what the world looks like from space. All those lighted cities, all those connections. A gigantic brain, one incredibly smarter and more powerful than any one brain.

Now imagine all that electricity going away, and everyone becoming again a disconnected brain. To me that's a horror.

Because of these things, I can't figure out what cause-and-effect is. But then, that's an old philosophical problem. The only thing I can say is that it is a infinite system of interconnected relationships. A cybernetic feedback system.

This dissemination of ideas can be good or bad ones. I don't have a problem with that. The world is full of bad ideas, always has been, always will be. The problem in the dissemination of people with those ideas, who want to use death and destruction to get rid of the people they disagree with so they can impose their ideas on everyone.

It's easy to tear apart the majority of bad ideas floating around. If only critical thinking skills were easier to learn than they are...

That photo of the cities of the world at night looks similar to images of networks of both the brain and the galaxy. They all seem to follow a simple fractal pattern.

I'm of the belief everything is conscious and alive.

Alive? What does it mean? Undergoing change is not enough.

That would mean no death for anything. What is alive and won't die at some point?