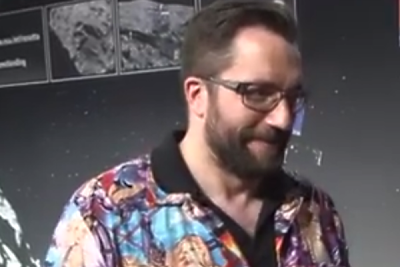 Here's the guy, Matt Taylor, who helped land a spaceship on an asteroid. He has a Ph.D. in Physics, appears to be a weightlifter, is all-sleeved out, and has the coolest shirt I have ever seen.

Some of the more insane - and unattractive -"feminists" threw a fit over his shirt, and made this geeky, clueless Science Guy cry on TV. All his accomplishments meant nothing to them...just his shirt.

Leftists - and feminists are leftists - are motivated by hate and envy and revenge. I'm sure they envied this guy and wanted to bring him down because of his accomplishments.

Years ago Erik von Kuehnelt-Leddihn pointed out the only way to deal with leftists to is knock their heads. He's right. He also wrote leftism is about overthrowing the Father.

Leftists are never satisfied until they destroy everything. So I decided it's a good thing to destroy them. Leftists either know fight or flight. When they attacked they flee. They become physically sick.

One said about Matt: "I don't care if you landed a spacecraft on a comet, your shirt is sexist and ostracizing."

Such people have to have their lives ruined. Otherwise they will destroy your life.

One of his attackers is the narcissistic psycho Rose Eveleth. 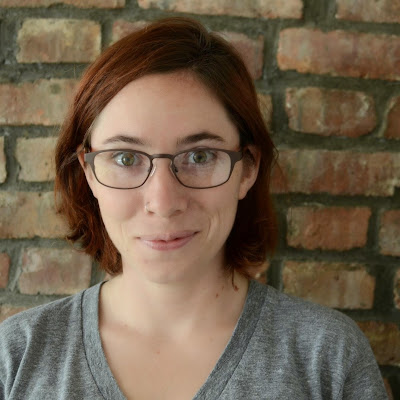 Hostile and unattractive, with crazy eyes. Motivated by hate and envy, and if attacked she'll collapse.

What has she ever done? Can she even change a tire? I guarantee you she can't land a spaceship on an asteroid. And she'll never be featured on a Hawaiian shirt, not with that face. I don't want to see her body, either.

LOVE LOVE LOVE that shirt. It is sold out but there are other beautiful shirts on the web site. I think every man should get at least one to wear. Hard to decide which one.

Feminism is the scourge of our lifetime. They with the SJW's are pushing us back into the stone ages. They are destroying everything around them so that they can fashion a utopia of their liking. I do not know whether if we can ever recover because of the damage they have inflicted on society and it institutions? The invasion and destruction of all male spaces will only result in more men checking out of society. This is only going to get worse. It is time that these feminist come out into the open and say that they have declared an all out war on men and they wont stop until society is totally feminized!!

Rose looks like a spooky psycho, head filled full o' sh!!. Discernment . . . what's that? She may have been knocked in the head once too often! Whoa!

If any proof were needed that feminists and SJWs are insane, it the fuss they kicked up about a shirt with mythical creatures that live in the sea.

"I don't care if you landed a spacecraft on a comet, your shirt is sexist and ostracizing."

This raging manbeast of testosterone made that statement.


My new bumper sticker for my gas guzzling Ford F-350!

Live in a liberal university town. I bought the shit, and in the words of Founder, "this is going to be great."

I'm sickened by the whole thing. This is the filthy world we live in that these Femcvnts and their ilk, with their third rate intellects and diseased psyches can get away with so much.

There's a bad moon rising. There will be blood I think.

Meet the new anti-hero of the day, boys. He actually IS an intellectual (and not a leftist poseur). As Bob notes, he is not a pencil necked beta male sniveller. If he is truly manly he will regard the antics of the SJW girls with quiet amusement. And - best of all, there he is, in all his subversive, dangerous crime-think splendour - right smack dab in the heart of academia - which lately has become a bastion of left wing sexual, political, ethical, and moral decay.

This, my friends, is the light at the end of the tunnel. The walls are beginning to crumble. Consider that back in the day these filthy people rebelled against 'The Man' and his soul crushing dress codes. The stories of greasy, stupid hippies wearing their tie-dyed tees and their refusal of personal grooming and hygiene are the stuff of urban lore. And today...some mousey twit of a young woman will no doubt come forward demanding dress codes for the plebes.
The rebellion has begun.

There's a way to help her produce these AWESOME shirts a LOT faster. This guy posted a #shirtstorm action plan on Youtube:

You'll LOVE his rant. He explains how to request Wal-Mart to licence these shirts and manufacture them.

"Lets slap the snot out of these insane, pampered, first-world whiny brats! Lets get enough of these shirts out in the world that they can't turn around without remembering how immature and stupid they were in the face of an actual real accomplishment." -- Deacon Parsons

Watch his video, do what he says, and bathe in feminist tears!