The Real Story of the Martyrdom of St. Trayvon 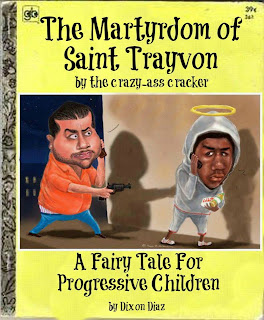 Eighth Grader Honor Student and born-genius Trayvon Martin is walking home in his graduation cap and gown, after spending the day tutoring disadvantaged red, yellow, black and white children, for they are precious in his sight.

Zimmerman spots Trayvon through the night by the near-blinding glow of his halo.

The football star nearly outruns him, but he is trapped by a "Do Not Enter" sign.

Faced with certain death or disobeying the law, Trayvon makes his stand.

Trayvon attempts to reason with his attacker using by the degrees in Philosophy and Theology he earned at five years old, but the illiterate hate-filled racist, still seething with rage because he failed the IQ and psychological tests to be a cop, will have none of it.

Zimmerman takes a swing of "Lean" (made from Skittles, Arizona sweet tea and Robitussion) and snarls, "Any last words, nigra?"

Trayvon looks his executioner in the eye and nobly replies, "Truth, Justice and the American Way!"

"WHITE POWER FOREVER!" shrieks the 2'11" Zimmerman as he unloads with his fully-automatic assault rifle, the recoil of which blows him back 20 feet so he lands on his back firing wildly into the sky.

If not for the Republican party Trayvon might have survived, but the skinhead's extended magazine, unfettered by their legislation, had unloaded hundreds of .50 caliber rounds into the future Nobel Peace Prize winner.

Zimmerman then bashes his own head into the curb repeatedly, while screaming in his girlish voice, "Help! Help! I'm being punked by a Negro! He's making me his bitch! Help! Mommy! Daddy! Help!"

When he is finished, Hitler himself steps back into his gas-guzzling vehicle and peels away, seeking kittens and puppies to run over.

As Trayvon lay dying, the last thing he sees is the "Bush Cheney 2004" bumper sticker disappear into the night.

A nanosecond later, he grew his angel's wings and fluttered to heaven, to sit forever at the right hand of God.

Sounds like the Bizarro World version of what happened.

Unfortunately, the movie that Hollywood will eventually make of this won't stray far from your script.

Oh, the movie's in the works!
http://ex-army.blogspot.com/2013/06/wha-choo-talkin-bout-fool-and-in-which.html

Plus Gansta Rap, black on black crime and black on everybody else crime.

They could do a remake of 'Birth of a Nation', follow the original script and in no way could it make black people look worse than the above is doing now.