The Necessity of Enemies

Every tribe in the world, past, present, and I guarantee you future, has referred to itself as "the Humans" or "the People" or "the Chosen," defining itself as human and relegating those outside the tribe to non-human and non-people status. The Chinese called China "the Middle Kingdom" (the middle of the Earth) and the Greeks called their local sea the Mediterranean (also the middle of the Earth). Not at all surprisingly, the Greeks called non-Greeks "barbarians," mocking the way they perceived their language ("bar bar bar bar").

The curious predilection of people to do these things is not only caused by our primitive instinct to form tribes (be they called nations, races or ethnic groups) but also by our narcissism, which in simplest terms can be defined as another instinct to divide the world into false but easily understood categories of Good and Evil.

Tribes not only define themselves as "the Humans," but also as good, thereby automatically defining Outsiders not only as non-human but also as evil. Unfortunately, it is a necessary thing to see Outsiders as both non-human and evil. In other words, enemies are necessary, and have to be created even when there are none.

When a tribe defines itself as good, the vast majority of members will never admit its imperfections. As such, those imperfections have to be cast elsewhere, and that elsewhere, of course, is the Outsider. The extraordinarily small amount of people who do see the tribe's flaws, the tribe will attempt to expel. Then they become Outsiders.

The psychiatrist M. Scott Peck called this casting of imperfections onto others "scapegoating," and defined it as "the genesis of human evil." When people see themselves as good, of course they have to project their badness elsewhere, onto someone else. It's the first defense people engage in, and it's even the lesson of the story of the Garden of Eden, in which Adam blames Eve for his transgression, and Eve turns right around and blames the serpent, which is a symbol of envy and hate.

This projection is just about the first thing children do. What parent has not heard, "You/he/she made me do it?" And what parent will ever hear from a four-year-old, "Yes, I did it of my own free will, and I take responsibility for it"?

No tribe, in its self-defined grandiosity, will ever admit its mistakes, unless absolutely forced to. People will rationalize and make excuses like there's no end to it. Actually, there is no end to it. It's always going to be someone else's fault, and once "those people" are eradicated, then there will be "an end to evil."

The U.S. has done a great amount of good in the world, but it has also done horrendous evil. How many Americans are aware that when American troops invaded the Philippines in the late 1800s they killed up to 200,000 Filipinos? I'll tell you how many -- almost no one. And of those who do know, I've had some defend it, just the way they defend the fire-bombing of the non-military, undefended city of Dresden at the end of WWII. I repeat: people will defend anything to support their tribe, even if it’s indefensible.

I'm also going to repeat that since tribes consider themselves both "the People" and good, and their badness is always projected elsewhere, this means there must always be enemies. The tribe has to have enemies to maintain its fiction of "goodness." If tribes can't create enemies to project their imperfections onto, then it's possible the tribe can't maintain its cohesiveness. If a tribe can maintain the fiction that only it is "Human" or "Chosen," and consistently define Outsiders as non-human and evil, and who are attacking the tribe, then it's entirely possible the tribe can endure for thousands of years, as long as it can create enemies.

Rene Girard, the French scholar who studied the mechanism of tribes, scapegoating and sacrifices, noticed the curious phenomena that when one tribe displaces another, the displaced tribe, being both scapegoated and sacrificed, thereby becomes "sacred." An example of this is the American settler's annihilation of the American Indians, who even now are considered "sacred," hence the fact that so many sports teams -- and military equipment -- are named after them.

Enemies need each other, and feed off of each other. This doesn't mean we don't have enemies, but enemies are not pure evil. When we see them as pure evil, we can hurt ourselves as much as we hurt them. Sometimes, more.

As one tribe after another is annihilated, what is left for a scapegoat and a sacrifice? Someone will always be found. That is why there will never be an "end to evil." It's always what happens when the tribe -- the group -- is considered more important than the individual.

Even if everyone in the world belonged to the same tribe, the same race, the same ethnic group, and spoke the same language, a scapegoat and a sacrifice will still be found, because someone has to be found to project imperfections onto.

This "we're good and human" and "you're evil and non-human" just might be the worst problem ever. It's what led Germans protecting "the Fatherland" to fight Russians protecting "the Motherland," culminating in the Battle of Stalingrad, a horrendous slaughter in which one million to two million people were killed.

This dichotomy has even infected and perverted religion, and has for a long time. Islam divides the world into "the House of Submission" and "the House of War." Guess who's human and good, and who isn't? If this isn't crazy, what is?

Or, as Hermann Goering, Nazi Minister of Propaganda, said: "...it is the leaders of the country who determine the policy and it is always a simple matter to drag the people along, whether it is a democracy, or a fascist dictatorship, or a parliament, or a communist dictatorship. Voice or no voice, the people can always be brought to the bidding of the leaders. That is easy. All you have to do is tell them they are being attacked, and denounce the peacemakers for lack of patriotism and exposing the country to danger. It works the same in any country."

Propaganda isn't all that hard, and people fall for it every time.

Since people seek meaning, importance and community in their lives, once they find it (or think they have found it) they will defend it by projection onto others, then deny they did it, or rationalize it as a good thing. Those three defenses - projection, denial and rationalization - are the three main, basic defenses of people.

Girard also noted that tribes use scapegoating to "renew" themselves by getting rid of the scapegoat. Let's use this as an example: the people of a country become exhilarated when attacked, try to draw together as one, expel the critics, destroy their attackers, and feel renewed and rejuvenated...for a very short while. Then they have to go it again, because it is never permanent.

As Saul Alinsky wrote in Rules for Radicals: “Pick the target, freeze it, personalize it, and polarize it.” "Polarize" means to split into good and bad. These concepts work in all circumstances, as military strategist John Boyd noticed about tactics: "Disconnect, isolate and disempower."

I have for the past few years realized this what feminism does to men - demonize men, project all problems on then, then draw together as a tribe/mob and try to renew themselves this way. I've also noticed that the reaction to feminism - commonly known as the Manosphere - in some ways does the exact same thing to its critics and to women - attack, demonize, devalue, expel. 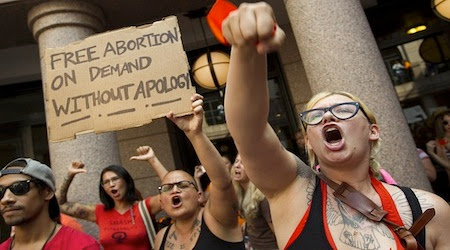 Nietzsche noted the same thing when he wrote about Dionysus, who was a Greek fertility god who demanded sacrifices to renew life. Whenever you see a mob rioting, you are seeing Dionysus demanding sacrifices - a scapegoat - to renew itself. As a fertility god, Dionysus was slain and dismembered every year to make sure the crops were abundant - death to renew life. That's how human sacrifices came about.

We still have human sacrifices today, although most people don't have the slightest idea what they are doing.

There are ways out of these problems, any of which I doubt will ever be implemented. You can get rid of tribes, which is not feasible, since it has never been done in the past. You can get rid of our narcissism, the concept that we are the good humans and those outside the tribe are non-human and evil. That is not possible, either.

You can change the common concept of good and evil, and cease to see it as good over here and bad over there, with nothing in-between. In reality good and evil are a continuum, and not two mutually exclusive categories. This seems to be at least a possibility.

You can get rid of the concept of "evil" altogether. Probably the best definition of "evil" that exists is what the Greeks called hubris, and the Bible, "pride": thinking you are god-like, or the Chosen, or the only humans on the planet. It leads inexorably to Outsiders being deemed as non-human and evil.

It sure looks to me that what most people see as "good" and "evil" are instead a continuum from humility to hubris - what the Greeks called Sophrosyne to Hubris (Sophrosyne is generally defined as "Know yourself" and "Nothing in excess").

I'd like to see someone come up with a definition of evil that couldn't be applied to anyone for any reason, thereby devaluing them into non-humans.

The simplest thing I can think of - here I repeat myself - is to stop devaluing "enemies" as evil. If you always see them as "evil" you can never understand their point of view. As Sun Tzu wrote, "If you know the enemy and know yourself you need not fear the results of a hundred battles."

Again, as the Greeks noticed, "Know yourself."

What I do know is this: as long as we are tribal, and narcissistic, and divide people into good and evil, human and non-human, sacrifices and scapegoats, we must always create enemies in order to maintain our tribes, our narcissism, and our belief we are good and others are evil.

Orwell would have understood this.