The Horror That is the Scrawny Dried-Up Spinster 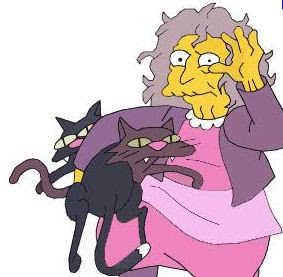 Several years ago I began to notice a certain kind of woman: scrawny and dried-up. They ranged from middle-aged to old. All of them had hostile looks on their faces. It finally penetrated that all of them were spinsters. Scrawny, dried up spinsters (with shriveled-up coochies, too). So beware. Whenever you encounter a scrawny dried-up, unattractive, hostile-looking woman, you'll know what you're encountering.

Here is an example of several year ago (I realized later it wasn't the first, but it was the most vivid):

I walked out to my van from a store and noticed the driver's door was ajar. That puzzled me since I was positive I shut it firmly.

Then I noticed off to my left side, about 15 feet away, a fortyish woman wearing wraparound sunglasses (which I dislike on anyone), appearing to give me a hostile look (hard to tell with the glasses). She had a cellphone in her left hand.

By this time I had alarm bells going off. Something was going on but I didn’t know what.

When I opened the door to my van she asked me, “Is this your van?” Now that's a dumb question.

“I called the police because you left your dog in this heat.”

She had opened the door to my van.

The dog in question was Mickey, my second pug and the first of my rescue ones. Mickey was blind in one eye and had been abused. I got him for free because no one else wanted him.

It was hot out, about 95 degrees. I had very cold AC in my van, had shaved Mickey’s fur to within a millimeter of his skin, kept a gallon jug of ice water in the van and a bowl to give him water, and when I got out I poured cold water on him, parked in the shade, and kept the windows down. I was never gone more than eight minutes.

Any dog can handle that kind of heat, with what I had done for him, for eight minutes without any problems. How do people think dogs in the wild survive? It’s not as if all they die when it gets hot. They hide in the shade or dig dens. And the only time a dog is in serious heat-distress it when they start drooling.

I immediately knew what this woman’s problem was because of the hostile look on her face and her attack on me without knowing the slightest thing about me and my dog.

I knew her husband had left her, or none of her relationships had worked out, so she was one of those women who blamed all her problems on men. The dog was just an excuse to make her feel self-righteous.

I told her, “The police aren’t going to do anything. They get these calls all the time and they take their time getting here because they want me to leave. You don’t know anything about me or my dog, so mind your own business and take care of your own problems.”

“You wait until the police get here!” she told me. What did she think they were going to do? Arrest me? Take my dog? Even if they had shown up they would have looked at the situation and left. The dog was fine, just panting a bit because I found out ten minutes later, he had to pee.

I decided to escalate things, which I do a lot. When people get angry they blurt out the truth.

“Fuck you. You haven't been laid in three years,” I told her. "You know why? Because you're a stupid, unpleasant bitch. And you're scrawny and ugly." (I do this stuff all the time to assholes.)

Her eyebrows shot up, her mouth popped open and she jerked backward. Then she unwittingly said something they proved my intuitions about her. She yelled, “You’re no gentleman! You’re not married!”

What did she do? Look at my ring finger the second she laid eyes on me? Oh, by the way, the first thing I do to all women is check their ring fingers. These days, a lot don't have a ring.

Just as I thought: men problems. The first words out of her mouth were about men (gentlemen, that is, men being nice, or more precisely, doing what she thinks is nice) and marriage.

“Your husband left you, didn't he?” I said (she twitched again), got in my van and left, with her still screaming, “You wait until the police get here!”

She was right about one thing: I’m no gentleman, at least not when dealing with people who get involved in my life and don’t know a thing about me. I will support my friends and family to the end but I am a complete bastard to those who cross me.

And I’ll bet she took my license plate number down and told the police the whole story about what a horrid man I was.

That is, if they ever showed up.

Never engage them on their terms. Never answer them. Change the way she thinks things are going to go. You might want to consider the tactics of the military genius John Boyd: "Disconnect, isolate and disempower."

When I meet the next spinster (and unfortunately I will) I think I'll just give them a stock answer: "You know what you're problem is? You're a scrawny, ugly dried-up spinster." (Big smile.) "You have a nice day." Then I'll leave without another word.

Actually if they can amuse me I gave me money. If they had a bad attitude, nothing. But I digress, since this article is about identifying scrawny, hostile-looking women with bad attitudes. Which is tell you the truth, ain't that hard.

That wingless harpy wouldn't recognize a gentleman even if he held a door open for her.

Every once in a great while you see and older woman with a beautiful glow and think "now she is someone to grow old with". But it is an extreme rarity these days.

I ran across an old woman recently who pretty much asked me to say "please. So I squeezed her hand, said, "Pretty please with sugar on top and a strawberry" and she almost blushed. She looked adorable.