Hierarchical Societies and the Fraud of the "Alpha"

But false prophets also arose among the people, just as there will also be false teachers among you, who will secretly introduce destructive heresies, even denying the Master who bought them, bringing swift destruction upon themselves. Many will follow their sensuality, and because of them the way of the truth will be maligned; and in their greed they will exploit you with false words; their judgment from long ago is not idle, and their destruction is not asleep. - (2 Peter 2:1-3)


I find it exceedingly curious how the concept of the "alpha" popped up and has been given such enthusiastic approval by some. I do know it is a reaction to the degradations of politically-imposed feminism against men. But that concept of "alpha" was never given any approval in the past, and for good reason: it is an almost clinical description of a narcissist/psychopath, who have been, in their various degrees, responsible for almost of the murder and destruction in the world.

The real name for the common definition of an Alpha is a narcissist, and the old word for a man who lied to and seduced many women is a Cad. They're tricksters, who use lies and deception and end up being trouble-makers.

The Greek referred to extreme narcissism as Hubris, and they considered a type of insanity in which the lost their moral sense and became consumed with power. The word "hubris," by the way, originally meant "to humiliate someone in public," and they considered it so obscene (which originally meant something unfit for public view) that they banned it from their theaters.

The word "alpha" was taken from the study of wolves and applied to humans. Among wolves, the word "alpha" means one thing, and one thing only: parents. So, then, the alpha wolves are actually beta providers for their offspring. So then, to use Manosphere terms, alphas are betas.

Wolf packs are generally six to twelve members in size, and they usually consist of the parents and their offspring. The word "alpha," taken from the study of wolves and applied to humans, has been given a redefinition that has nothing to do with how it is applied to wolves. The redefinition is wrong, too, as I just pointed out: it's really about narcissists and cads.

Later, L. David Mech, who studied wolves in the '70s, also used the term "alpha," but when he realized it was being misappropriated, wrote, "The concept of the alpha wolf as a 'top dog' ruling a group of similar-aged compatriots is particularly misleading."

In other words, the term "alpha" is based on bad science and is wrong from the beginning.

What I find fascinating is that the researchers only found the modern concept of "alpha" wolves among captive wolves, i.e. wolves in zoos. In the wild, the way wolves acted was completely different.

So, then, there exists the possibility that the modern concept of "alpha" only exists in unfree societies. And we don't have much of a free society anymore, not compared to the way in the past. Back then, alphas were considered patriarchs, which barely exist today.

There is an entire world of difference between a voluntarily hierarchy based on legitimate authority and an illegitimate one based on fraud and force.

Look at it this way: in human prisons there is a strict hierarchy - cop killers on top, child molesters on bottom, whom it is okay to kill. And such a strict hierarchy only exists among wolves...in prison. It's not for free wolves.

Our society in many ways has become extremely hierarchical, especially when it comes to money and power. That is why there exists the widespread belief that only one percent of people have nearly all the money and power. Which, in many ways is true. Everyone else is pretty much an indentured servant, almost poverty-stricken, helpless and hopeless.

The modern concept of alpha is an attempt to free oneself of the shackles of an unfree, hierarchical society - from from the worst of women, free from oppression - "Men Going Their Own Way.". But the concept, as is now stands, won't do that. For one thing, Alpha to Omega is a strict hierarchy, and that is not a good thing. And with human nature being decidedly imperfect (and many ignorant of that fact), those who truly believe in the hierarchy of Alpha to Omega are going to say, "I am an Alpha/Sigma and if you disagree with my hierarchical beliefs you are a Beta, Gamma, Delta and Omega!"

If we lived in a free society, the modern concept of "alpha" would be again be considered horrendously destructive, and the patriarch would again ascend to its rightful place. 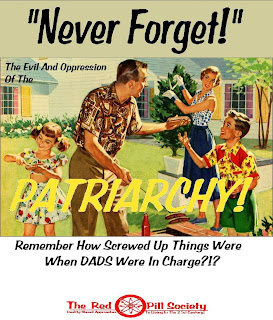 Under "patriarchy" women are prevented, as much as possible, from destroying anything of value. That is why every successful culture that has ever existed has been a "patriarchy" and there has never been, contrary to the delusions of some, a matriarchy. The closest to one is what we have today, and it has been destructive to the point society is on the edge of collapse.

None of this doesn't mean women don't have a necessary place in society. They do. But it is not a place where, as some think, they are gold-digging, heartless "hypergamous" whores who rationalize everything and are only interested in "Alpha Fux and Beta Fux."

If we had a politically and economically free society, what it look like? Probably somewhere along the lines of "Leave It To Beaver" and "Andy Griffith." Bill Bryson, who has written about his life growing up in the '50s, described a wonderful life and a simpler, sillier time I never knew existed outside of TV.

And in all of them, where are the strict, exploitative hierarchies that exist today? I didn't see them. They did exist, of course, but where? Where there was no freedom - in the strict hierarchies of prisons and militaries and "police officers" - as opposed to "peace officers". (As an aside, where else do you often find strict and sometimes brutal hierarchies? The public schools, especially high schools.)

Humans are not meant to live strict, unfree hierarchies. They are meant to be free. Sometimes, unfortunately, they don't know how to get there (to be precise, back to there, when the purpose of government was to be as small as possible and only protect "life, liberty and property") and often make destructive detours until they again find the right path.

The bigger the State grows, the more civilization retreats, and the more "liberty" turns into "libertinism" - anything goes. Like the modern Sodom and Gomorrah that we have in some places today.

I am most definitely reminded of the literary theme of the Machine State vs. the Natural State. The example I generally use is that of Star Wars, specifically the second one, with the Ewoks.

The Ewoks live in natural state, as opposed to the Empire, which is a world-destroying machine with the Emperor on top and Darth Vader (whom the late mythologist Joseph Campbell called "the perfect bureaucrat") as second-in-command - and he was half man, half machine, "twisted and evil." In a free society, both would go nowhere. Their "authority" is based on pain, terror, murder, destruction.

In Ewok society, if anyone appears to have any kind of legitimate authority, it's the Storyteller, who, even though I didn't understand a word he was saying, was clearly passing on the culture to the younger. That's what good storytellers do.

As for the Empire, the Stormtroopers are identical and interchangeable - disposable cogs in the Machine. It is not a good life - those in control are interested only in that: control. Power. Domination. That is the nature of the State. Along with...

....turning you into a machine - these days, a replaceable cog in a decadent hierarchy. In the past we probably reached our peak of the Natural State in the '50s - again, for an example, read Bill Bryson. Or take a second look at the graphic above.

It doesn't surprise me at all that so many people are deserting the cities and moving into rural areas - to get away from the hierarchies of soul-degrading work, from incompetent schools, from fascist police, from the strict, destructive force-and-force hierarchies of the State.


"Most educated morons try to model the dynamics of human societies based on what we sorta know about bee colonies, wolf packs or troops of monkeys and apes." - "Playing the Devil's Advocate"

Im intrigued, what do you mean by a "free" society? To be honest, in the west there is more "freedom" (meanin being able to deviate from standards without any reprocaution) then ever. Women do not have to live up to any standards and men are now fighting for the same "right." If this is your idea of freedom, then you are advocating their recent society.

in manosphere terms, the alpha is the one most willing to supplant his dignity and copious amounts of valuable free time for the sake of a little female attention on the terms of the female, while the beta knows better than to waste his time chasing the potential for a false accusation and a boatload of unneeded drama.

so yes, alphas are betas.

As with you, from the onset I have contended that the manospheres definition of "alpha" is nothing more than a deluded parody of reality. Mastering the sexual psychology of what are in essence (due to birth control measures)infertile females in an amoral and irresponsible culture so that one can deposit D.N.A. in a sterile vacuum is what passes for "alpha?" Gimme a break!

Historically, "alpha" men are the natural leaders of men ("natural" not implying either political whores or butchering psychopaths), men whom other men are willing to follow into battle or in business, and not by force. They are "natural leaders" easily recognized as such by those around them and as such there is no necessity to thwem to argue that argue that they hold "alpha" status. Their position is naturally assumed by others because of who and what they are.

The manospheres "alpha" has essentially none of these qualities - none at all. They are little different than feral dogs who have figured out one thing and one thing only; how to pick up deranged or semi-deranged females who are generally somewhat if not totally incapacitated due to the consumption of alcohol and/or drugs and as stated before, generally of incapable of reproduction. Hell, the feral male dog roaming around seeking the "bitches" in heat actually fares far better - he leaves his prey stuck with offspring carrying his D.N.A.

In the animal kingdom, that's what passes for "alpha." You manage to pass on your genes instead of leaving your D.N.A. to die off in an environment that is, in truth, as biologically receptive as the bathroom sink. These guys? To quote Jethro Tull from "Thick as a Brick"; "You're love's in the gutter, you're sperms in the sink."

You may be correct. But modern women are disgusting whore filth, so let the alphas fuck them and laugh at thier tears.