Oh, How Horrible! Leftist Destroyers Smacked Around in Russia!

I like the way one cop hits a woman with a pink knit cap.

In the U.S. we've got the police murdering innocent men, women and children left and right while ignoring the real problems. In Russia the police smacked around Pussy Riot, some leftist women, who, if they had their way, would destroy Russia and return it to barbarism.

The only thing leftists understand is getting their heads knocked together. It's always been like that. "Free speech"? That's one of the first things leftists try to take away, followed by every other right.

Pussy Riot has been described as holding a "leftist anti-capitalist ideology." In other words, they have no understanding whatsoever of human nature.

This isn't even "a beating." A beating is what the police did to Kelly Thomas, when they beat him to death for 20 minutes. 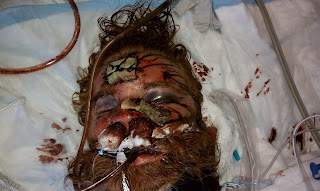 This is a beating. The video is not.

Seeing those twats get flogged made my day. I would like to see the same treatment for the negroes, the occutards, the homosexuals and other leftist idiots that feel the need to be morons in public in order to protest.

I like how the one hopping and singing immediately stops as soon she is whipped. Maybe smacking a bitchy woman isn't such a bad idea after all.

Even more appalling, the thugs who murdered Thomas Kelly were acqulitted by a jury and one of them wants his job back (the cops were fired). I hope Kelly's family files a wrongful death suit and leaves them penniless.

There was no need to attack Pussy Riot. They're leftist whackjobs but aren't dangerous and certainly aren't hurting anyone. If they want to make public fools of themselves, I say let them.

Those bitches should still be rotting in the Joint instead of on the outside doing this crap. Obviously they learned nothing, are indeed "destroyers" of what is good and righteous and are right back doing the only thing they know how to do.

Beat them, whip them, and make them go back and serve out their full sentences.

As soon as men say "enough" the charade that is "modern" society will fall. This is a perfect example of what this world has been, and will always be about. Men create society, men enforce the rules, and ultimately, men use violence when all else has failed. The female will go as far as the male allows, then she will be stopped. The girls in this video understood the basics as soon as the whip came out. Songs, dancing, and pussy riots ended. Period. This is the nature of our species.

Finally back to something interesting. Your posts the last couple days have been boring as shit.

I never thought as an Xer approaching 50 that I'd be cheering on an ex-KGB agent.

"Finally back to something interesting. Your posts the last couple days have been boring as shit."

Hey you fucking faggoty ass calling people faggot, fuck off yourself you free speech-hating son of a bitch.

I'm going to pick up one of guys by your ankles and use you to beat the other one over the head.

This article really drew some intelligent commentators. I hope they have soap and water to wash the gravel out of their knuckles.

Thirteenth comment is a charm. I've reblogged this and quibcagged it here:
Counting Coup in Russia