How to Turn This Into "Sexual Assault" 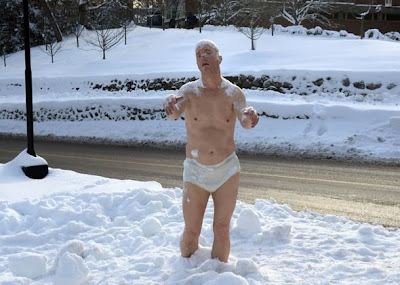 This statue is causing a lot of controversy at Wellesley, with the more retarded women there claiming it's "sexual assault."

I suggest it be replaced with a naked man with a boner and a bloody butcher knife, in a running position, with a insane, meth-fueled look of hatred on his face.

Then they'd have something to complain about.

They are just pissed because it is a creepy low end beta dweeb..if it was Clooney or Pitt there would be no complaints.

I guess I think if I would see that stupid funny life-threatening immobile guy I would immediately run for my life! Wouldn't you? I would hysterically laugh and violently cry while I do it too I guess? After hopefully reaching safety I would feel like I am a victim and I would surely be told so too. But also I would be rightly told that I'm an extremely strong, smart, and thoroughly sane superwoman of a woman. I really think this whole thing is awful but I feel a sense of happiness at the same time? I don't know why. I really don't! Damn that man! LOL!!!

That statue is really tacky. Does anyone know who put it there?

Apparently the art department put it there, and sooner or later it will be moved inside.

Seems to me the motive behind this statue isn't to create beauty, but to cause annoyance or a headache - displeasure - among the dweebettes. Isn't that motive kind of psychopathic? I'm fairly sure the "artist" is enjoying the knowledge that he is ruining people's day just for the sake of ruining their day.

I guess it has been put there is "make people think." Think about what I don't know.

Are you sure that it's a 'he'? The description of the suspected artist's personality traits that you provide sounds more like a typical modern female's.

"I suggest it be replaced with a naked man with a boner and a bloody butcher knife, in a running position, with a insane, meth-fueled look of hatred on his face."

Gotta figure he isn't out collectin' for the Red Cross.