Built by Slaves Under the Whip and Sword

I don't remember exactly when I realized it. It might have been watching The Ten Commandments as a teenager. These people spent their lives as slaves building huge worthless monuments? Under the whip and sword? Dying by tens of thousands? Jesus, what an awful life!

Later I realized all these glorious monuments and even cities were built by tens of thousands of expendable slaves. I have mentioned the Great Wall of China and the Taj Mahal. These things weren't built by highly-paid, voluntary workers. By slaves! With a sword at their throats!

Recently I saw a PBS program about Machu Picchu, which was an amazing Inca city pretty much built on a top of a small mountain for Inca royalty. It was built of various sizes of stones chiseled into bricks. It was never quite finished. 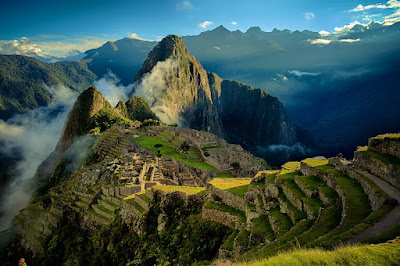 Scholars don't know much at all about its history. But consider this: since all those other places were built by slaves, I think it's obvious that Machu Piccu was built by life-long slaves who toiled for what? Fifty years? A hundred years? To build this place!

Whenever you see something large and amazing built a thousand or two thousand years ago it was always built by slaves. And those societies are always the same: a vanishingly small minority of that "1%" using the police and military to oppress and crush the povery-stricken peasants. Who dropped like flies working.

I'm sure all those amazing engineering feats of the Romans were built by slaves. And as for Greece, the smarter ones spent their times creating philosophy while the slaves did all the work.

Slavery, of course, even infected the United States, which was why the South created nothing of value. The planters were a indolent and lazy class. Everything of value was created by the non-slave states.

I've mentioned Saudi Arabia recently. The "royalty" doesn't work. They've imported tens of thousands of Third Worlders to do all the work. Who are paid a pittance. And if their "employers" keep their passports...well, just too bad. For all practical purposes they've got slaves! Indentured servants!

Thank God slavery didn't last very long in the West - not even 200 years, if I remember correctly. The British used to send warships out to intercept slave ships, and they even sent said warships to Brazilian harbors to put a stop to slavery in Brazil.

I was raised in Illinois and once visited when I was 19 the Old Slave House, which is in far southern Illinois. It was in the only county in Illinois in which slavery was legal. The stories the curator told us were horrifying. For one thing he told us no one had been able to spent a night in the house.

Many years ago I read a story by the late Manley Wade Wellman (I still have a copy of the magazine in which it was published - "Cavalier," perhaps) in which slave ships tossed their slaves overboard - in chains - to drown them when they saw a British warship coming their way. Of course, the story ended with the dead slaves coming up out of their watery graves and dragging the captain down with them.

Actually the West never got really going until it got rid of slavery.

Of course there are people in the West who think certain people (it always seems to be Republicans) who want to impose slavery.

I used to be a newspaper reporter and editor. I once interviewed an idiotic middle-aged woman who wrote a novel (which she had published by a vanity press) which was about how Reagan wanted to impose slavery on women - to keep them barefoot and pregnant. I thought, is this stupid woman serious? She was.

Good Lord, people really are imperfect, to do the things they've done! And they always rationalize why it's a good thing.

As Robert Heinlein once said: people aren't rational. They're rationalizing. And they'll rational everything. Slavery, child molestation, murder. Everything.

Bob - I ran a youth hostel in Nice in the 80s, and the Arab owner also took my passport for the time I worked there. And he didn't pay me, and would only lend me money. Needless to say, when I tried to leave my employ - the issue of him having my passport and me owing him money came up. The shit I've seen.

There is some evidence that the Pyramids were built by valued (by the Pharaoh's) and professional Egyptian craftsmen.

"There is some evidence that the Pyramids were built by valued... and professional Egyptian craftsmen."

Specifically, archaeologists found lots of beef bones in the work-camps near the pyramids. Since beef was an expensive luxury food, they reasoned that it probably wasn't being fed to slaves. This sounds quite reasonable, though a good historian will tell you to take everything written by archaeologists with a large grain of salt.