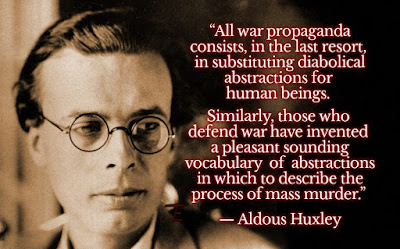 My last year in college a lieutenant colonel from the Army spoke to one of my larger classes. He wanted us to join. We'd be made officers, he said. We'd be "taken care of," he told us. As for the others (he meant the front-line grunts who did the fighting), he smirked as he commented, "we don't care what they want."

In a flash I understood what was going on. There had been riots over Vietnam. People had fled the country. The military had learned its lesson: you don't draft the smarter and the well-to-do and turn them into cannon fodder. Instead, you turn them into officers who don't have to fight, and put those of average, or less than average, intelligence in the front lines.

As I heard an Army sergeant once say, "Sorry people in front, good people in back." The less-intelligent, the military has decided, are expendable. They're thow-aways. The military does not care about them. They may pretend they do, giving them artificial legs and whatnot, but they really don’t.

I don't know how many people joined from that class. I didn't. It didn't seem conscionable under the circumstances.

I wondered then, and still wonder now, how easily those destined to be cannon-fodder fall for such empty words as "patriotism," "honor," "defending your country," and "liberating the oppressed."

My paternal grandfather spent eight years in the Army so he was to tolerate it, but then, he was a Scots-Irish hillbilly from Tennessee via Appalachia – cannon fodder. My uncle and cousin spent four years in the Navy and both told me, “It was a waste of four years of my life.”

I know some people fall for those impressive-sounding words a lot easier than those who could be officers.

Those words are just fantasies in people's heads. They don't mean much of anything. In 30 years the war in Iraq will be as forgotten as the "war" in Vietnam. A new generation won't understand it at all, just like the current one doesn't understand Vietnam. It might as well be the War of 1812 to them.

But what happens when those fantasies in their heads runs up against reality? I mean those who come back permanently maimed. What do words like "patriotism" and "honor" and "liberating the oppressed" mean then? What do they mean to those blind and missing limbs?

I suppose at first those wounded will try to convince themselves it was for a good cause. I understand that. No one wants to believe you ended up in a wheelchair for nothing. You want to think it was for a noble cause.

Some years ago I saw a TV interview with an Army Ranger who had been in the invasion of Panama. He ended up shot through the spine and permanently in a wheelchair. The interviewer asked him if it was worth it. He said, "Yes."

One of the reasons for the invasion was to stop the flow of drugs to the U.S. Yet drugs still come out of Panama, just the way there are still poppies being grown in Afghanistan.

What comes after the permanently wounded can no longer say, "Yes"? Unending hate and bitterness because of what has been permanently lost? How many kids is a quadriplegic going to have? How many are even going to have a marriage?

There was a man in a small town I once worked in who had been clipped across the back of the neck in Vietnam. What clipped him was a bullet. He was 19 years old. Had he fallen forward in the rice paddy he was crossing, he would have drowned. He fell backward.

He spent the next 30 years lying in a bed before he died of pneumonia. I'm sure he was never visited by Robert McNamara or Lyndon Johnson or any of the other men who started the undeclared Vietnam non-war.

Of those coming back now who are permanently wounded, how many have been visited by those who are the most rabid for war, but did everything they could to avoid serving? How many times did Bush or Cheney or Rumsfeld visit those hidden back wards of a VA hospital?

You'll never see any Chickenhawk visit the wounded. Ever. They don't want to see them. It intrudes on their fantasy world of believing the wars are worth it. Seeing the maimed would pop the bubbles the live in. Instead, they'll mouth phrases like "heroes making the ultimate sacrifice" and asking God to bless them, and for people to pray for them. They'll do it from a distance, though. They'll try to avoid thinking about the fact those words won't make limbs grow back, or the blind see, or the crippled walk.

The bad fantasies for those in the front lines are beliefs in a just war, patriotism, liberating the oppressed. The far worse realities for those who come back from those front lines permanently maimed are different. It is to be forgotten.

I like your article. I did find it interesting however, that you did not mention Obama, Clinton, Hagel or Gates, among those who failed to visit the wounded.
A POX on all of them I say, be careful you are not falling for their lies. js

Your column is all well and good but boys don't usually join the forces because they want to fight wars but because they need a job and the only attributes that they have are youth and strength.That is possibly why they are being sidestepped in education
and legislated against.Of course it's a mugs game unless you have the training to be a mercenary where you can actually earn a few bob but it's a game the elite wish to continue for as long as it possibly can.
How about Britain ww2 and all the 16yo boys who signed up underage and the feathers in the post sent by women who refused to envisage men not enlisting but,at least they didn't nick all the jobs.Today is different,if you are in a job which is constantly changing what happens if your career gets short circuited due to war.You find your companion is now your boss and likely to be of the lip-sticked type.
I am an old guy and I remember ex troops standing round trying to sell papers and matches after "Jerry" won the war (which they obviously did).women didn't have the time of day for them,they were too busy with the Gi's

If you are trying to buy bitcoins online, PAXFUL is the best source for bitcoins as it allows buying bitcoins by 100's of payment methods, such as MoneyGram, Western Union, PayPal, Credit Cards and they even allow converting your gift cards for bitcoins.