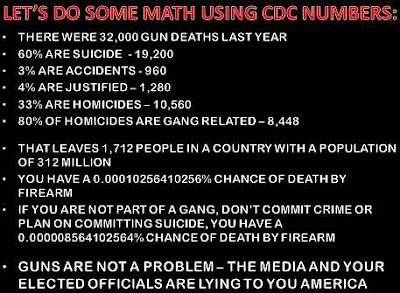 by Margot Sanger, and it's from the New York Times.


When Americans think about deaths from guns, we tend to focus on homicides. But the problem of gun suicide is inescapable: More than 60 percent of people in this country who die from guns die by suicide.

Suicide gets a lot less attention than murders for a few reasons. One big one is that news organizations generally don’t cover suicides the way they do murders. There’s evidence that news attention around suicide can lead to more suicides. Suicide is more stigmatized and less discussed than homicide.

Not all of those suicides are by gun, but a majority are. And while some people feeling suicidal impulses will choose another method if a gun is not at hand, public health researchers cite two reasons guns are particularly dangerous: 1) Guns are more lethal than most other methods people try, so someone who attempts suicide another way is more likely to survive; 2) Studies suggest that suicide attempts often occur shortly after people decide to kill themselves, so people with deadly means at hand when the impulse strikes are more likely to use them than those who have to wait or plan.

That means that strategies that make suicide more inconvenient or difficult can save lives. Guns, when they are in the home, can make self-harm both easy and deadly.

There are a few classic studies that look at these factors. One is historical: In England in the first half of the 20th century, many people died after intentionally inhaling lethal fumes in coal gas ovens. When oven technology changed to less dangerous natural gas, fewer people had an easy means of suicide in their home. Only some people found another suicide method, and the suicide rate fell substantially.

Another occurred in Israel, where members of the military had a high suicide rate. In 2006, the army stopped letting soldiers take their service weapons home on weekends. The suicide rate fell there, too, by 40 percent.

The high rate of gun suicides in the United States is not a new problem. Even in the 1980s and 1990s, when violent crime rates were much higher, gun suicides were still a more common cause of death than gun murders. But in recent years, as the gun homicide rate has flattened out, the gun suicide rate appears to be ticking back up slightly.

Many of the gun-control measures that politicians propose to reduce the number of homicides and mass shootings would have a limited effect on gun suicides. Efforts to ban so-called assault weapons or to reduce the number of bullets that could be loaded into a gun at once would probably not make suicide any less likely. But other measures meant to prevent gun homicides might have an effect on gun suicides, particularly those designed to identify and help people with mental health needs. Mental illness, which may contribute to mass shootings, is a clear risk factor for suicide.

Right. Guns are great, but if you have a family member who suffers from depression, as I do, keep the piece locked up while you're not around.

Should be kept locked up at all times anyway. In NZ, by law preferably disassembled so that for eg the firing mechanism and ammo is locked separately away from the rest of the gun. The police will come around and check occasionally.

Interesting, the CDC numbers for 2012 - suicide is #10 at 40k vs 2.5m combined (all races, sexes, and ages). That means that roughly 1.6% of deaths are by suicide - method not given. Even homicides and the like aren't on that particular CDC's list, you have to dig into the stats by age.