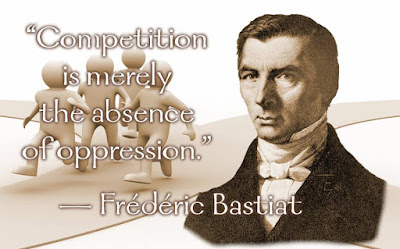 This is from the ancient Greeks, and I've written about it several times: well-being (eudemonia) is achieved through excellence (arête). And how do you achieve excellence in anything? Competition.

Everyone knows that when it comes to sports. Who wants to watch the tenth-best? And of course it was the Greeks who came up with the Olympics.

It also applies to the (misnamed) "capitalism." The reason it works so well is because of competition. I still remember American cars from the early '70s (there is a reason you don't see any of them on the street anymore, unlike, say, a '67 Mustang or a '56 Chevy). Then there was competition from the Japanese and American cars got a whole lot better (I got 344,000 miles out of a 2000 Chevy Cavalier until the head blew, and it was a four-cylinder. The orginal transmission was still working just fine).

Not at all surprisingly, Big Business doesn't want competition. It wants monopolies. They want to privatize the benefits and socialize the costs (if you knew the subsidies McDonalds and Walmart gets from your taxes your mouth would drop open). They don't want to deal with what Joseph Schumpeter called "creative destruction" - which just might put the 1% out of business.

For that matter when you have competition you get innovation. When the living is too easy and luxurious you have very little innovation. You need competition - even strife (my house, central A/C and furnance were created because of competition - strife - caused by the elements).

The reason America has so many states is that each of them was supposed to be an experiment. They were supposed to compete with each to get worthwhile people to move there (think of all the people fleeing the Commie paradise of California and moving to Texas or Missouri or Tennessee).

The purpose of government is to maximize the well-being of its citizens. Unfortunately the federal government has become a suffocating behemoth bereft of competition. Government is to benefit the citizens - and it's barely doing that today (it benefits the 1%). Because, ultimately, there is no competition. And the people pay and pay and pay for that with their lack of well-being.

And right on cue the majority wake up and start to re-assert themselves.

Of course doing this is a fascist right wing movement, doncha know....

"The purpose of government is to maximize the well-being of its citizens."