I've pointed several times there is a lot of nonsense in the Manosphere - lots of it is completely fact-free.

Recently I've been reading all those illegal aliens are really "alphas" and women show up to be raped by them. I guess this counts as the clueless version of evolutionary psychology.

I actually knew some rapists, not to mention a woman I worked with briefly - like one day - was murdered by a serial killer. Tiny little thing, strangled, throat crushed, body dumped.

I've known more than one man who hated women. They were all cowards and wouldn't stand up to a man. They only attacked the weaker - women, children, homosexuals. The same that serial killers go after (you don't see them going after motorcycle gang members). One of them beat up a ex-girlfriend - until some friends and I showed up and he found us standing there when she opened the door and let him in. That problem was permanently solved.

Anonymous Conservative understands these things better. There are two reproductive strategies - r and K. R doesn't take care of their kids and considers them expendable. They're lazy, don't want to work and expect free resources. Think rabbits. Think, among humans, many blacks.

So which ones are the rapists and cowards? Do I really have to state it?

These immigrants, with their rape and murder, are not K-selected "alphas." They're cowardly rabbits.

The serial killer I mentioned? He's in prison for life. He probably murdered half-a-dozen teenage women in the area I'm from - and strangled every one of them (he also strangled a pregnant woman). He's unattractive and was not popular with women (although somehow he got married). Rabbit, not wolf.

These illegal alien rabbits will not stand up to a man.

That picture below? Bunch of Hungarians going on patrol to intimidate Muslims and other Third World rabbit trash. Why aren't all those Muslim "alphas" coming out to fight? Because they're cowards, which means this conflict will never happen. They'll rape women and fight seven to one, though. 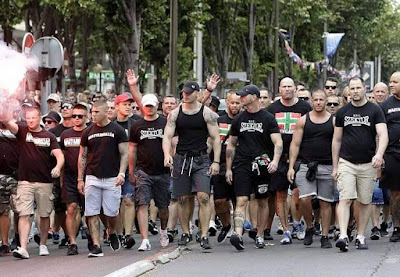 To take care of the problem, you pound the offenders flat. Problem solved! They'll run like the rabbits they are.

For that matter, as I mentioned before, psychopaths/sociopaths have no conscience, no remorse, and no guilt, no love. They're incapable of them, which is why the worst of them are the serial killers who torture and multilate woman, cut them up and have sex with their body parts, which is what, among others, Ted Bundy and Jeffery Dahmer did. That's what no conscience and no remorse will do to you. And you cannot turn yourself into a psychopath, contrary to some loon like "Roosh" (who is a wimp and liar) claiming he was a "Dark Triad psychopath."

The same applies to "Roissy" and "Vox Day," who are clueless when they praise these conscienceless monsters.

"Anonymous Conservative understands these things better. There are two reproductive strategies - r and K. R doesn't take care of their kids and considers them expendable. They're lazy, don't want to work and expect free resources. Think rabbits. Think, among humans, many blacks."

Anonymous Conservative is a scientific fraud.

Makes more sense than Vox Day, Roissy and Roosh, all of whom are buffoons.

I remember, Roissy/Heartiste/whoever had up at one point a post lauding the "alphaness" of that murdering low-life Fidel Lopez, who ripped the guts out of a woman he was having sex with. (Literally ripped her intestines out and killed her, yes. I do not encourage anyone to go looking for the details. Gruesome.)

I was thinking "WTF?" and there were a few other WTF comments as well. That post mysteriously disappeared - very quickly! (Prior to that post, I'd never heard of the low-life. Since catching that post I've read absolutely nothing of Roissy's.)

Whether you consider Anonymous Conservative to be great or a fraud, you cannot by any stretch of twisted imagination consider that sort of behavior to be any form of "alphaness". Lower than Omega scum, in the nomenclature of BoneCrkr. Like Bob states about the murderer in his post.

I read enough of Roissy to realize what a loon he is. Same with Roosh. Since I understand them, I no longer have any use for them. I still occasionally read Day, as long as he stays away from babbling about Alphas and Betas and Gammas and whatnot.

I have to admit that I occasionally read Day as well, though very intermittently. Some of his stuff is thought-provoking.

Bob: "Recently I've been reading all those illegal aliens are really "alphas" and women show up to be raped by them."

No they are not 'alphas' they are from a culture that is aggressively opposed to Western civilisational norms. And their activities are being concealed by the establishment.

"I actually knew some rapists, not to mention a woman I worked with briefly - like one day - was murdered by a serial killer. Tiny little thing, strangled, throat crushed, body dumped."

It's a good job for you that correlation of events ( in this case your proximity to numerous shady events ) is not causation.

Bob: "He's unattractive and was not popular with women (although somehow he got married). Rabbit, not wolf."

The serial killer guy that killed shedloads of chicks, why did the silly little bimbos go near him? Perhaps he exhibits those, you know dark triad characteristics that women tend to desire.

They are not buffoons, Bob. They're just young and stupid and trying to make sense of a world that their elders clearly don't understand either.

Just as the naughty parts of men and women are designed to go together - so are their minds and psychologies. When feminism started messing with that the equilibrium was lost . Equilibrium is the natural state of affairs and is now trying to reassert itself. Toxic feminism has created the Manosphere - which caters to boys more than men.

How do you like them apples, you old fart? You and I, good sir - are obsolete! Vox and Roosh will be the mentors of young men while you and I are seen as doddering old farts with archaic values and no real relevance in today's world! HAR HAR HAR! Are there any glasses in the Treehouse, Bob? Or are we to drink directly from the bottle?

Oh, and before we open the bottle Bob - you have Jim up on your blog roll and although he makes for spectacular reading... He seems to think along the same lines as Roosh and Vox. He's an odd duck... Sometimes he sounds like an old hand like us and others... He sounds just as retarded as Vox.

I made a point of crapping in the comments and I told him that I did so at your behest! :)


This book will help people understand the importance of race in civilization:

"March of the Titans: A History of the White Race" by Arthur Kemp.

Try that clown Roissy. He writes of it several times.

“No they are not 'alphas' they are from a culture that is aggressively opposed to Western civilisational norms. And their activities are being concealed by the establishment.”

Most people, Americans and Europeans, lack any concern for Western civilization (proper spelling) norms. They are more focused on their country, as well as it should be.

"Makes more sense than Vox Day, Roissy and Roosh, all of whom are buffoons."

Anonymous Conservative takes scientific studies and uses their conclusions to suit his own narrative. That his, he takes the results and twists and turns their findings to make a "point". He's a fraud.

Anonymous Conservative is a scientific fraud.


He's not a conscious liar. He believes he's telling the truth. Unfortunately, he's incompetent at science and his book is the kind of thing that would get flunked at an undergraduate level. Anonymous Coward probably gets some of his facts right, but he's not a scientist. If he gets something right, it's only by accident, it's not that he actually understands the topic.