The Power of Metaphor

This is a monster, and in her case it is not a metaphor.


Here's what Wikipedia say a metaphor is:

"A metaphor is a figure of speech that describes a subject by asserting that it is, on some point of comparison, the same as another otherwise unrelated object. Metaphor is a type of analogy and is closely related to other rhetorical figures of speech that achieve their effects via association, comparison or resemblance including allegory, hyperbole, and simile."

Now of course that doesn't make any sense, because you have to have examples to understand it. Before that, I will note that Ray Bradbury said we could not exist without metaphors, and he's exactly right.

Now I will use some examples to show what a metaphor is.

First, a metaphor uses the words "is" or "are." "He is a pig" is a metaphor, because a man is being compared to a pig. He's not literally a pig, but that metaphor means he's fat, ugly, messy.

I heard of Hannah Rosin a year or so ago. She's a nut (a metaphor). She wrote The End of Men and is married to...a balless wonder (a metaphor), and she started humiliating her son when he was three by having him argue with her 11-year-old daughter about which sex was superior. As far as I'm concerned, she is an unfit mother and the father is unfit.

I don't use word like "Alpha" and "Beta." I prefer the more accurate words I was raised with. (I will say "mangina" is a great word - and that, too, is a metaphor.)

Hannah Rosin's husband is a wimp and a pussy, and she is a man-hating cunt (the word "skank" also comes to mind). 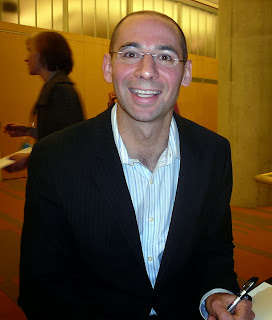 "Hi! I'm a mangina and wimp, and I was born without testicles!"


Now those are metaphors, because I'm comparing her husband to a wimp and a pussy. He's not literally a pussy, but figuratively he is one. There is no root word for "wimp" that I know of, but it's considered to have become popular from 1915 to 1920.

"Pussy" is a slang term for the female pudenda and is thought to derive ultimately from Low German puse - vulva. "Cunt" derives from a list of London street names from about 1230. That street name was "Gropecuntelane," one of a warren of streets and alleyways given over to the lowest forms of prostitution.

Of course, her husband is not literally a vulva, and Hannah Rosin is not a street given over to the lowest forms of prostitution.

But metaphorically, how they have been described is exactly what they are.

And that, friends, explains just how powerful and necessary metaphors are. And I guarantee you that you now know what a metaphor is. Ain't education grand?

By about the halfway mark I was just overwhelmed. She is reaming off all these "facts" without backing any of it up - and the crowd just sat there and bobbled their heads.

A public appearance - and she couldn't even drag a brush through her hair.

My heart goes out to her family. I cannot imagine a man giving this shrew the time of day.

jewish vermin is what they are... Rosin and her husband.

I don't care that they are Jewish, but dear god is it obvious.

What is it with Jew women and the need to destroy Whitey? If they don't like America so much then they should go to a country that would welcome them in such as China. I wonder how long those hook-nosed demons would last in China if they tried to pull their subversive bullshit?

I read that wimp came from Wimpy a supporting character in the Popeye comic strip.

This woman is such a whack job, she could be a parody of a radical feminist, not a real life person. She reminds me of Libby Wolfson, the fictional feminist/self help talk show hostess with a wealthy keeper played by Andrea Martin on SCTV during the 1980's.

What are the chances that his pet name for her is mistress?

Another barking twat and her feeble enabler(s). I can't wait for the whole stinking edifice to come down on their heads.