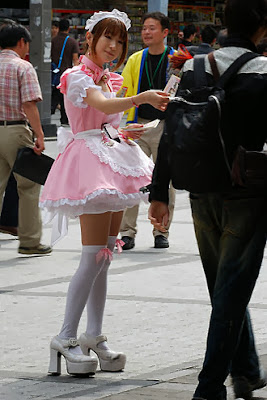 How does she keep her balance on those things?

Over here I suppose Hooters might be similar and perhaps the old-time Bunnies from the Playboy Clubs (are they still even around?) but apparently so many women are unfeminine these days that Maid Cafes are becoming common. And they now exist in America? Will wonders ever cease?

Of course the more bisonic women will become hysterical about these places, claiming...who knows what? Patriarchy? Oppression? Sexism? Landwhales of whatever size and spinsters of whatever age will try to have these places shut down. (I think the French maid uniforms would give them hysterical hissy fits for being "degrading" and "pornographic.") Outrage, self-righteousness and hurt feelings trump all.

Here, I suppose the men might drink a beer and smoke a cigar and not have to argue with a woman. Ah, bliss! Even if for a little while.

I find some of the services a little odd, such as the spoon-feeding, but I suppose it just shows how many men are lacking any kind of attention from women, and go to an extreme when they get it.

When I was growing up my mother at least made dinner. Apparently a lot of women today can't even cook at all.

I owned a taxi for a few years and ran around several hookers (all the drivers did). Some of the men paid for the girls to come over and watch movies, or go on dates, and just sit and talk. Sort of a portable maid cafe.

All of these guys were unpopular with women and couldn't find anyone.

As I've pointed out before, in myth (which is the distilled wisdom of the human race) women are either nurturers or destroyers. If they don't nurture then they destroy. Since so many today are destroyers these guys are having to pay to get some nurturing. In some ways it appears they've turned into babies to get it - and that makes me wonder if they didn't get what they needed as babies and young children.

This is from Wikipedia.


"Maid cafés (メイド喫茶 / メイドカフェ Meido kissa / Meido kafe) are a subcategory of cosplay restaurants found predominantly in Japan. In these cafés, waitresses dressed in maid costumes act as servants, and treat customers as masters (and mistresses) in a private home, rather than as café patrons. The first permanent maid café, "Cure Maid Café," was established in Akihabara, Tokyo, Japan in March 2001, but maid cafés are becoming increasingly popular. As they have done so, the increased competition has made some use unusual tactics in order to attract customers. They have also expanded overseas to countries like China, South Korea, Taiwan, Australia, Hungary, the Czech Republic, France, Mexico, Canada and the United States.

"The maid costume varies from café to café but most are based upon the costume of French maids, often composed of a dress, a petticoat, a pinafore, a matching hair accessory (such as a frill or a bow), and stockings. Sometimes, employees wear animal ears with their outfits to add more appeal.

"Waitresses in maid cafés are often chosen on the basis of their appearance; most are young, attractive and innocent-looking women.

"Some maid cafés also have cross-dressing males as maids.

"Maid cafés were originally designed primarily to cater to the fantasies of male otaku, fans of anime, manga, and video games. The image of the maid is one that has been popularized and fetishized in many manga and anime series, as well as in gal games. Important to the otaku attraction to maid cafés is the Japanese concept of moe, which generally describes a love for anime, manga or video game characters. More specifically, moe refers to adoration for young or innocent-looking female characters. People who have moe (especially a specific subcategory known as maid moe) are therefore attracted to an establishment in which they can interact with real-life manifestations (both physically and in demeanor) of the fictional maid characters that they have fetishized.

"Most maid cafés offer menus similar to those of more typical cafés. Customers can order coffee, other beverages, and a wide variety of entrées and desserts. However, in maid cafés, waitresses will often decorate a customer’s order with cute designs at his or her table. Syrup can be used to decorate desserts, and omelette rice (オムライス Omu-raisu), a popular entrée, is typically decorated using ketchup. This service adds to the image of the waitress as an innocent but pampering maid.

"There are many rituals and additional services offered at many maid cafés. Maids greet customers with 'Welcome home, Master (Mistress)' (お帰りなさいませ、ご主人様！ Okaerinasaimase, goshujinsama) and offer them wipe towels and menus. Maids will also kneel by the table to stir cream and sugar into a customer's coffee, and some cafés even offer spoon-feeding services to customers. Increasingly, maid cafés offer grooming services, such as ear cleanings and leg, arm, and back massages (provided the customer remains fully clothed), for an additional fee. Customers can also sometimes pay to play card or video games with maids.

"Customers are also expected to follow basic rules when patronizing a maid café. One Tokyo maid café recently published a list of ten rules that customers should follow in a maid café. For example, customers should not touch a maid's body, ask for a maid's personal contact information, or otherwise invade her personal privacy (by stalking). One common rule in a maid café is that photographs of maids or the café interior are forbidden. However, customers usually have the option of paying an extra fee in order to get his or her photograph taken with a maid. The maid will then hand-decorate the photograph for the customer."

I'm astonished by how much discretionary income the Japanese still have after six decades of money-printing. Can somebody explain how they do it?

Apparently the men live with their parents for decades. I think they make enough to have fun but not enough to move out. I see the same thing here.

A small amount of discretionary income is quite common in many nations and the pleasures of an Otaku life aren't that expensive especially if like most Japanese you have good impulse control.

Also as Bob Wallace mentioned, starting a family is simply too expensive in many parts of the world.

Its part and parcel why the birth rate among native Europeans (and increasingly even the immigrants) and all Japanese , Singaporeans Honk Kong residents and the like are so low.

The people running those countries who care (and the Japanese do care) are going to have to adapt to the fact that lower work derived income equals lower numbers of good citizens or just citizens in general. Heck places as diverse as Brazil and Iran are sub-replacement fertility now.