This is a video of Hillary Clinton appearing to have a petit mal epileptic seizure. Personally I think this is a combination of her alcoholism and brain damage from a very bad concussion several years ago (watch the movie Concussion sometime. And Muhammad Ali did not have Parkinson’s – he had puglistica dementia. What Ferdie Pacheco referred to years ago as “pseudo-Parkinson’s.).

My mother’s mother – whom I never met – died from epilepsy she developed after being hit by a car. She took a hell of a whack to the head – just one whack. The reason I never met her is because she died when my mother was 14.

Where did I find this video? On a blog, then I found it at YouTube. This is why I ceased watching the news/chattering classes/talking heads for years. They never tell the truth. You will never see this video on TV news.

The media can do little more than attack Trump for shooting from the lip – how he’s unfit to be President and will start a nuclear war. But not a word about Hillary’s alcoholism and brain damage and epilepsy (I hope that Trump brings up her alcoholism and epilepsy in debate and asks the media why it was never covered).

Remember how ex-cokehead Dubya Shrub often came across as a moron who couldn’t talk straight unless he was angry? That’s because he was an untreated ex-alcoholic – a “dry drunk.” And look what he did – starting wars that have gone on for 15 years and only made things a lot worse in every way. That’s what happens when you’re an alcoholic for 20 years - you end up with brain damage.

The Hildebeast is unfit to be President.

Trump and the Republican party are no prize. But the Democratic party…Jesus! Satanic!

Those who know Hillary say she is confused a lot of the time and people pretty much have to hold her hand. I’m not surprised.

Let’s do a thought experiment and pretend the Hildebeast becomes President. Since she won’t be able to fulfill her duties, who will? Her “husband”? He sounds like he’s at end of his time on earth, too.

Those in the Democratic party certainly know about Hillary’s very bad physical problems. So why did they run a woman for President who’s clearly developing dementia? Do they hold the public in that much contempt to think that a nearly-senile woman would make an acceptable President?

The only reason I take an interest in politics is because politics takes in interest in me. Politics at its best can only make things a little bit better.

I read some wit years ago claim if you didn’t want to believe in evolution all you had to do is watch the devolution of Presidents from Washington and Jefferson to Barak Obama. Christ! A homosexual half-breed!

I am reminded of an old saying: “You may not believe in the Devil but the Devil believes in you.” I am also not surprised when Satan offered Jesus power over all the kingdoms of the world he said no.

I know an 84-year-old man who was involved as a political consultant his entire life. He told me he only met one honest politician – the rest had sex, money and drug problems. Think Bill Clinton…think his “wife.” 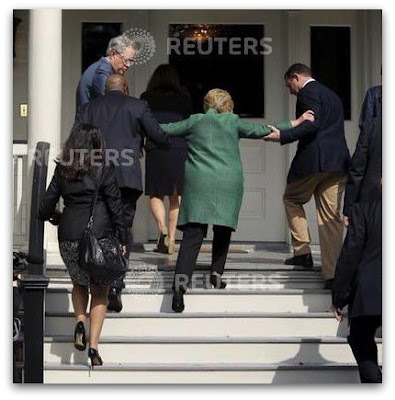 And now she needs to be helped up the stairs. I wouldn't be surprised if she dies soon.

And Horror of Horror's Bob, her Veep is a CATHOLIC!!!!!

Guess she better not die, or the Pope will rule over you yanks!

People used to say that about John Kennedy.

You are joking, right?

In the United States most Catholics, no less than Mainline Protestants, really believe in leftism. Their Christianity is merely a gloss for their political views. That is what it means to be a "moderate" of any religion. In light of the Pontiff's political pronouncements that might actually mean he will be ruling over us but not for the reasons the paranoid Fundamentalists that you are (probably) satirizing think.


The Catholic Church was Americanized about 150 years ago.

If she did die, they'd just replace her with a double. If they could do it to McCartney, at one time the biggest rock star on the planet, and nobody noticed, then they could easily do it for Hillary as well.

Pretty neat trick to replace one of the best songwriters of his generation with one a notch better. Songwriters better than early McCartney aren't a dime a dozen. But they found one with his voice who looks like him, too?

Andrew, of course. Up in the Great White North, we have had a lot of Catholic Prime Ministers. Abortion, gay marriage, and now euthanasia! All, before you guys down below. Thinking you are still at least five years away from a full right to die law (after you settle your bathroom disputes!).

She won't quit. This is a childhood dream she won't let go. Obama killed her last chance to be President against an easy opponent, and she'd rather die than let this go. The only way they can get her to drop out is indict her, and although Obama would just love to do it, because he's an angry queen who doesn't like another queen following him and has a special hate on for the Clintons due to Bill making that crack about how he would have been fetching coffee a few years before he ran, I don't think they'll let him pull the trigger.
The Democrat Party is all in this. They want to use the sexism card like Obama used the race card. Being a womyn, a protected class, they see her as a way to get away with anything by saying any mild criticism is sexist. Apparently their strategy now is to nominate only people who fall into a protected class so they can deflect any criticism of bad policies with simple one word epithets. Being college misinformed idiots, rational arguments are hard for them.

A lesbian following a half-breed fag. Good Lord has the U.S. gotten weird!

The Catholic Church was Americanized about 150 years ago."

Around 85% of nearly 70 million US Catholics explicitly reject Catholic doctrine on contraception, which is a good litmus test for being dedicated to unpopular teachings. Of 10 million remaining, maybe two-thirds are at least somewhat culturally "Protestantised", taking more cultural cues from American Evangelicals than from European tradition. "Hardcore" Catholics in America today probably number barely 2 million- and those people are not exactly thrilled with the current Pontiff.

There's simply no real constituency here for blindly following political orders from the Pope- nor has there genuinely been one anywhere else in the world since the end of the French Wars of Religion in the late 16th century.

'Guess she better not die, or the Pope will rule over you yanks!'

This isn't old monarchy Europe where the Pope chose the king.

'If she did die, they'd just replace her with a double. If they could do it to McCartney, at one time the biggest rock star on the planet, and nobody noticed, then they could easily do it for Hillary as well.'

That's one of the more absurd conspiracy theories floating around the internet.

"That's one of the more absurd conspiracy theories floating around the internet."

Sings like him, looks like him, plays a left-handed guitar. Impossible, of course, which is why I call such believers Conspironuts.

The left wing Media has been there for a few of her lapses but we never saw reports about them did we? Everything with Hillary is "cover up". She is a liar, devious, manipulative and a traitor. How anyone with an ounce of common sense could vote for her as POTUS must have a brain deficiency.