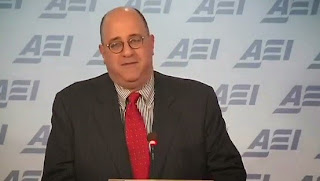 Another coward, traitor and buffoon I wrote about years ago.


Poor John Podhoretz -- oafish, repulsive, cowardly, backstabbing, boring, a picker-of-his-nose-in-public -- and so dull-witted he couldn't cut soft butter with his forehead. Then there's the Matrix plug in the back of his Foul and Most Foreign Peanut-Shaped Pinhead (F&MFP-SP), the one feeding him the most hallucinogenic of Philip K. Dick novels -- the never-written one in which a brilliant, adventureous Poddy is a cross between Dr. Benton Quest and Race Bannon. If that plug ever falls out, reality will come crashing in on Lil' Pod, and he will see himself in all his grotesque, inbred, Betty Friedanesque glory -- a high-speed DNA collision between Elmer Fudd and Beldar Conehead.

That plug is apparently pumping all sorts of anti-American ideas into Lil' Pod's F&MFS-HP, such as the one that Americans want to import millions of Mexicans who fly the American flag upside-down on a pole and put the Mexican flag above it. It's Lil' Pod who's upside down, a position I've heard described as "cranio-rectal inversion." If it's permanent, it will surely improve his looks. It certainly won't hurt his brains.

Lil'Pod is the Quasimodoesque offspring of the original Poddy, Norman the Now-Senile. Senile Poddy's main claim to fame (excluding all his shameless self-promotion) was putting the make on Jackie Kennedy back in the '60's, then crawling away like a dung beetle after she skewered him with the icy eyeball and contempuously asked him, "Just who do you think you are, Mr. Podhoretz?" Somebody who never looked in a mirror, apparently, or else he didn't believe what they all told him -- that here was a man, no matter what his age, who always looked like an old geezer who should have a stogie in his mouth, wear boxer shorts, and back up his Cadillac on the interstate because he missed his exit.

Lil' Pod's well on his way to his father's decayed state, and suffers from the same malady: the delusion that people should listen to his opinion, even though he's as ignorant as my pug dog, whose underpowered brains can't tell the difference between a hot dog and a cat turd. In a recent article Lil' Pod (I suspect that nickname applies in more ways than one) whirled his pom-poms in support of totally open borders, claiming it's a good thing for the U.S. because he sees "a vibrant, dynamic, extraordinarily strong and extraordinarily stable country that has dealt successfully with far more pressing domestic problems without losing a beat."

See what I mean about that plug in his head? Frosty Wooldridge has a clearer view of what's really going: "Why are we allowing millions of diseased, non-assimilating, poverty-stricken revolutionaries and agitators and criminals, who despise us with a passion and who clearly have every intent of destroying our Republican form of government, into this country? What madness is this?"

Yes, Lil' Pod, it is madness, one that can, and has, destroyed countries. His sputtering synapses apparently can't comprehend this simple fact.

While Lil Pod's father occasionally made sense when he was younger, such as pointing out that the media portrayal of poor, downtrodden blacks was the exact opposite of their predatory behavior experienced by those in the real world, Lil Pod's accomplishments consist of little more than answering the most obscure of trivia questions on Jeopardy about "The Seinfeld Show."

That's an example of a mind that memorizes every tiny little twig and misses the entire forest.

Just how enormous is Lil Pod's self-delusion, that he does not know what he is? At the Washington Times the column he wrote for it was read out loud, for its laughter-inducing qualities, in a ritual called Podenfreude. For a long time he was referred to as "John P. Normanson," as in "John Podhoretz, Norman's son."

That's just pathetic. And now he completely dismisses as fantasies concerns about the increase in crime, disease, and reduction in wages brought by illegal immigrants, ones who are automatically criminals by being here illegally. He also claims the 14th Amendment, which grants automatic birthright citizenship to the children of illegal aliens, is responsible for "a great deal of the advances made in the 20th century by immigrant children." Apparently he thinks all those 89-IQ Mexican grape pickers are working on Ph.Ds in Molecular Biology in their spare time, or that their children are. . .children who are confused about which flag belongs in what country.

No, Lil' Pod, the critics are not living in a fantasy world. You are. As a leftist, you, like all leftists, don't merely misunderstand human nature; you don't understand it at all. The real world is one you don't want to deal with. One you can't deal with.

What would happen if Lil' Pod's delusional recommendations were put into effect, nation-wide? The result would be catastrophic. Would Lil' Pod say he was wrong and accept responsibility? Of course not. He would blame the problems on someone else, claiming his recommendations were not followed. Even if they were, to the letter.

Such are the wages of self-deception.

If Lil' Pod ever ended up in a field picking crops, he's throw his hands up to heaven, sit down, burst into tears, and wail, "I can't do this work! My butt's too big!" Then he'd wipe his eyes, go home, ignore his minaturized genitalia, and dream a little dream of being a Vikingesque marauder.

Come on, let's be honest here. Lil' Pod is a hideously inbred nerd, the offspring of two grotesque Troksyites -- Midge Dector and the already-mentioned Norman Podhoretz. Such ghastly inbreeding has made Lil' Pod an utter incompetent whose opinion is irrelevant on any issue. Perhaps he might go away some day. Perhaps. Or perhaps he'll just hang around forever like crabgrass and turn into the Fidel Castro of obnoxious stupidity -- a dildo-headed, beady-eyed little dork.

Were he not the son of Norman, he'd spend his life watching TV game shows, yelling at the screen, "I know that answer!" and dreaming of being the center square on Hollywood Squares. And probably having nightmares in which the audience laughed at him when the late Paul Lynde made double entendres he didn't understand, while he sat there like an organ-grinder's puzzled monkey who knows something is wrong, but hasn't quite realized someone has stolen his little red cap.

We need to encourage more immigrants from Singapore, South Korea, Japan, Italy, and a few others with scores above the US average (98).

You're blood's been up the last day or so. That's not necessarily a bad thing, but get yourself good bottle of wine tonight; whiskey if that's your preference.

I actually wrote those articles some ten years ago.

How come Americans' solution for everything is "import more foreigners?"

And people wonder why we are losing our sovereignty....

"How come Americans' solution for everything is import more foreigners?"

Were he not the son of Norman, he'd spend his life watching TV game shows, yelling at the screen, "I know that answer!" and dreaming of being the center square on Hollywood Squares. And probably having nightmares in which the audience laughed at him when the late Paul Lynde made double entendres he didn't understand, while he sat there like an organ-grinder's puzzled monkey who knows something is wrong, but hasn't quite realized someone has stolen his little red cap.

So, you're saying if John Podhertz wasn't the son of two New York intellectuals he would be---me?

The only consideration we don't make in our immigration policy is whether a given immigrant will benefit the country and the people already living here.
In particular the simplest and most important consideration for potential immigrants is whether the average American man would potentially be interested in getting together with a woman from that culture/ country (Chicks from Poland/The Ukraine? Yes. Chechens and tribesmen of the Khyber Pass? No.) Ignore this and you are just importing another group of permanent aliens who will never assimilate.

" We need to encourage more immigrants from Singapore, South Korea, Japan, Italy, and a few others with scores above the US average (98)."

That's IQ fundamentalism. The average American IQ is meaningless because it varies so much between races. America doesn't have an IQ problem. It has a diversity problem and a crisis of confidence in the people who have already demonstrated the IQ and competence in building the country to this point. We already have a policy that explicitly discriminates for IQ, anyway, called the H-1B visa. It's great for foreigners with high IQs and the bottom line of tech billionaires, but having an imported caste of technocrat aliens doesn't really benefit the average American.