The Only Time I Enjoyed Public School

“To a very great degree, school is a place where children learn to be stupid.” ― John Holt

I am an introvert, which means I don't do well in large groups (to be accurate, I'm just more introverted than extroverted). Mobs of people drain me the way a vampire drains blood. So I think it's pretty obvious I didn't do well in public school. I daydreamed my time away and sometimes fell asleep. Sitting up in my chair, of all things. ("Bob, are you listening?" "No, I was asleep." Sometimes: "No, I wasn't listening.")

However, I did enjoy public school exactly one time. It was in-between six and seventh grade, when I went to summer school and was in the gifted program. I had two classes for about half-an-hour each, with about 45 minutes in-between them. I hung out in the library between classes, being Midwestern summers are hot and humid to the point you can get heat stroke if you so much as poke your head out from under a tree.

I remember that summer vividly, more vividly than anything else in public school except for the fights I was in. Or witnessed.

Middle-school was a horror, especially seventh grade, and in high school all I did was daydream and party and get high and drink on the weekends. And what I good time had I - it was a cross between Animal House and American Graffiti.

Perhaps some kids do well in high school - the jocks and cheerleaders. Which, for most of them, is the high point of their lives. After that, it is downhill until they turn into Al Bundy or an insurance salesman (which is what happened to the quarterback in my graduating class). As for introverts, it's close to being in a prison.

I see no reason for anyone being in a public school for six or seven hours a day, for 12 years. It's babysitting while parents slave their lives away. What's wrong with two hours a day?

In fact, after the first grade I educated myself. Public school was just a distraction and a torment and a bore. As far as I'm concerned, you can close down these behemoth-sized schools with a thousand students and bring back the one-room school house.

That's what true education is - wandering around investigating things that interest you. Which, in my case, was just about everything. Kids should be bold adventurers, not frightened and timid...which is what school does to them.

Education is a quest. It's play, which is a serious thing. Education as play is what Jesse Stuart found in his book, The Thread That Runs So True. It's why Plato wrote about play (paidia) and education (paideia). He also observed, "You can discover more about a person in an hour of play than in a year of conversation...life must be lived as play."

The few times I was interested in school and enjoyed it, it was play. The Animal House/American Graffiti weekends were play. School on the other hand...

...I and many others have found public schools are machines that wants to stamp out cogs, the cogs of course being the misnamed "students." I think of the identical Stormtroopers in Star Wars...cogs in service of the State. Blech.


"Don't sweat it. Find what you love...and do that. You'll know it when you see it." - Richard Feynman 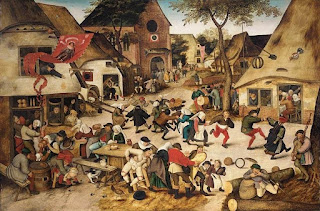