"I'm a Feminist Until Chased by Cicadas"

Most women are not feminists. Most women have been infected by feminist ideas, though.

I once had a girlfriend who told me she was smarter than me and could beat me up. I just smiled. When I asked her if she had ever been in a fight, she said no.

I knew she was afraid of insects. Once she put a glass on top of a spider in the kitchen and left it there three days. 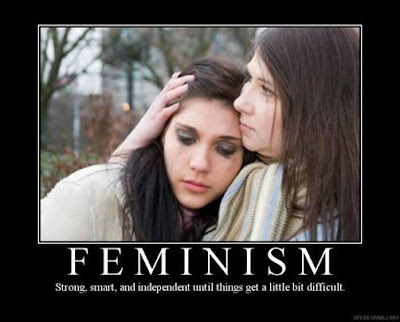 Then we had a cicada infestation. I had been through one before. It was amazing. It was estimated there was a few trillion of these things - shrieking, buzzing, dive-bombing you by the dozens. They're hideous but totally harmless.

She'd pull her hood over her head, wave a flyswatter in front of her face, and run from her car to the house, going "Oh! Oh! Oh! Bob! Bob! Oh! Oh!" She was truly frightened of cicadas, and I don't know why. They're scary-looking, but that's all they are.

During the cicada infestation I had my six-year-old niece with me. A cicada flew in the car. She let out a shriek that hurt my ears. "It's going to bite me! It's going sting me! I'm scared of it!" I had to pull over and shoo it away. (She also told me if she was in the military and was yelled at, "I would cry.")

At least my girlfriend didn't shriek.

When I was a teenager and living at home, some dachshund got hit by a car and was lying in the street in front of my house.

Two little girls came out with a bucket and shovel and put the dachshund in the bucket. Then they were going to bury him in the field. When the dachshund flopped out of the bucket the girls shrieked, turn and ran.

Sorry, but I couldn't stop laughing.

What happened to the dachshund?

I buried him. The girls never came back.